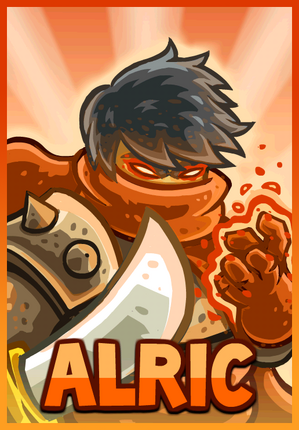 Alric the Champion is a hero in Kingdom Rush: Frontiers. He's unlocked at wave 4 of Hammerhold.

One of the best warriors in Hammerhold, Alric makes fighting a form of art. His discipline and training allows him to strike with lightning speed while also calling upon warrior spirits from the desert to aid him.

The last of the Desert Warriors, his eyes gaze the desert like a hawk, his sword strikes true like the fangs of a viper, for he carries within himself the souls of his fallen brethren that can be summoned to fight by his side as deadly sand warriors.

He has (possibly) fair skin, red fiery eyes and grey hair. He wears a red scarf, red gloves, iron armor with a spiked shoulder pad on his right shoulder, grey pants, and leather boots. He wields a cutlass and an iron shield.

Some stories are branded by fate, others by sheer luck. Alric's story was forged in sand and blood.

Born in a rustic tent embraced by the desert, his first breath was filled with the warm wind of the oasis. The entire tribe greeted him as the chieftain approached the crib and recited the sons of the desert's dogma: "In peace be fair and gentle as the water of the oasis, in war be unstoppable and fierce as a sandstorm.", a creed that has been followed by countless generations of Detek-en-Dil.

The  Detek were well known for their fierce, yet fair warriors; The desert was their home and ally, their law was the only one they obeyed.

Alric grew up following his clan's credo, learning the ways of the desert and finding solace in the sands' embrace; Little did he know it would be the same sands that would soon be tainted with his brothers' blood.

It was 20 years ago when the armies of the Scarlet Sultan set their sights on the desert tribes. Cruelty, tyranny, and savagery were the Sultan's means. Nothing would stop him from imposing his will over the lands.

The desert tribes rebelled against him, but they were no match for the overwhelming and vicious onslaught that was set upon them. Soon the proud Detek warriors stood alone in defiance.

The warriors knew that the only possible way to beat the impossible odds was to lure the overwhelming forces of the Scarlet Sultan so deep into the desert that they could never survive; so day after day the Detek retreated further into the desert taunting the Sultan and his men, steering them into their doom.

When they reached the desert's heart, they set an ambush and attacked the Sultan's army; The Detek knew this was going to be the last battle of their lives as they were gravely outnumbered. The combat was brutal. The scorching sand became tainted with the blood of the Sultan's army as each brave Detek took down tens of soldiers before meeting their sandy graves.

The great sacrifice of the Deteks in defense of their freedom awakened the Great Desert Spirit from his centuries-long slumber; He turned the dying Deteks into living sands that merged into a colossal sandstorm and wiped the remnants of the Sultan's army.

A blood-covered Alric was all that was left standing when sandstorm cleared out; With his heart filled with revenge and sorrow, he faced the Sultan and ended his cruel reign with one stroke of his sword.

To honor the spirits of the Deteks and Alric's bravery, the Great Desert Spirit granted Alric one gift before disappearing under the sands: to call his former brethren to aid him in battle as mighty Sand Warriors.

Special manuevre that strikes its opponent 2/4/6 times in quick succession.

Summons 1/2/3 sand warriors to aid him in battle for 8 seconds.

Alric is among the best (if not the best) melee heroes in Kingdom Rush: Frontiers, designed to guard choke points against hordes of enemies and absolutely destroy them; and especially be able to hold stronger enemies that would easily rip through normal soldiers. He has the best stats: lots of health, massive damage, heavy armor and a decent heal rate. He can safely tank and kill most enemies without problem, and is still able to hold the line extremely well even when under overwhelming pressure. Currently, Alric is the most durable hero against physical damage in the game, even better than Grawl, the Stone Giant.

Alric has only two active skills: Flurry and Sand Warriors, both of which recharge very quickly and have a significant impact on the battlefield.

Always place Alric next to your main choke point. Not only he will seal the spot with his sand warriors, Alric will kill lesser enemies quickly, much reducing the pressure put on the choke point. When necessary, do not fear to send Alric forward into a horde to thin them out, he rarely dies, thanks to the huge health bar and a great amount of armor. Tanking Alric against an especially strong enemy is a good tactic, as he can hold them for an extended period of time, longer than most other heroes.

The most likely way for Alric to die is fighting Saurian Brutes because of sheer damage, or from the poison of Savage Hunters' darts, or the ranged attack of Saurian Blazefangs and Saurian Deathcoils, all of which deal True Damage, irresistible by armor. Also, he cannot defeat Bloodshells either, as those have 95% physical armor and will tank everything Alric does to them (although Spiked Armor deals True Damage which ignores its armor). While he still lasts for a while against these enemies, it is advised not to send Alric to confront them, instead make use of soldiers, skeletons and sand warriors to shield him. Also, DO NOT send him forth to attack the boss Nazeru as Nazeru possesses an instant kill attack. Nazeru will most likely destroy Alric before he even gets one hit off.

Since Alric can heal himself fully in 10 seconds or less, retreating him is very much recommended when Alric is heavily wounded. This rarely happens though; even fire or poison is not a big problem for this big guy.

Here are a few side notes on using Alric in different situations: 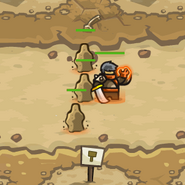 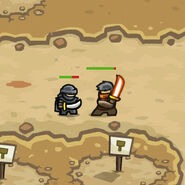 Alric in the frontiers intro

Alric in the frontiers ending
Add a photo to this gallery

View All Heroes
Retrieved from "https://kingdomrushtd.fandom.com/wiki/Alric?oldid=52965"
Community content is available under CC-BY-SA unless otherwise noted.