The Arcane Wizard, called Arcane Tower on the iPhone version, is a Level 4 Magic tower in the original Kingdom Rush, with a wide range and the highest damage per shot out of any tower. Its spells include Teleport, which instantly moves a group of enemies backwards along the path, and Death Ray, which instantly disintegrates any enemy regardless of health or resistance.

Compared to the other Level 4 Mage Tower, the Sorcerer Mage, the Arcane Wizard tends to be better at cleaning up tougher enemies, but lacks reliable crowd control, like the Sorcerer's Earth Elemental, though this is slightly mitigated by Teleport.

The Arcane Wizard is a true powerhouse. Its high-damage, channeled spell can one-shot most smaller monsters and make short work of other enemies with high HP or armor, be it on the ground or in the air. It also harnesses the power of the deadliest ray known to man: the Death Ray, which can turn any monster to dust in one hit. It is first available at The Citadel.

"Space is merely a perception, a concern for mortal men."

Teleports a group of enemies** back down the path. (Cooldown: 10 seconds)

BEAM ME UP SCOTTY Teleport 250 or more enemies. 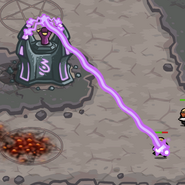 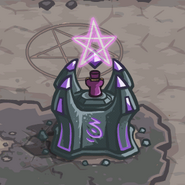 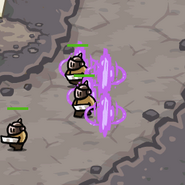 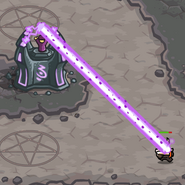 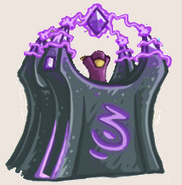 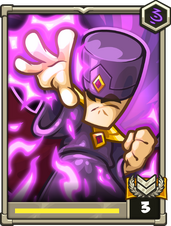 Arcane Wizard is the second Companion to be unlocked in Legends of Kingdom Rush, who is introduced in Gerald's Great Escape!

We came across a camper during our travels.

The camper turned out to be a wizard. He looked at us as he raised his eyes from his book.
"I sense you are in need of an expert in the arts of arcana. Would you care for my services?"

The wizard stood up and patiently gathered his belongings before joining us.
"You have my... mana?"

Arcane Replenish : Spells with cooldown have a 20% chance of refreshing their cooldown after being cast.

Preparation : Reduces all refreshing cooldowns for 1 turn if the character ends their turn without using any skills.