The Arch-Druid Henge is a level 4 Artillery Tower in Kingdom Rush: Origins, unlocked in stage 7, Rockhenge. Arch-Druids can store up their ammunition when idle and then release up to three rocks at once, like the Archmage Tower from Frontiers.

Compared to the other level 4 tower, the Weirdwood, the Arch-Druid Henge attacks faster and its upgrades give it superior crowd control. However, the damage is the same from the Menhir Circle, requiring some support when facing stronger enemies.

Curses an enemy for 5 seconds, causing a percentage of all damage dealt to it to also affect nearby enemies.

The right to bear arms!

Invokes a mythical runed bear to block and fight enemies.

The Runed Bears have different names, as with all soldier units.

A really great strategy involving Arch-Druid Henges is to pair them with Golden Longbows. A combination of Sylvan Curse and Hunter's Mark ability can severely wreck armies of even rather durable enemies, with a maximum of DOUBLE DAMAGE to ALL ENEMIES IN A GROUP. Runed Bears and barracks allow for bigger crowds of enemies to suffer this type of massive damage. Arch Druid Henges could easily wipe out a group of Satyr Cutthroats, Sword Spiders, Spiderbroods and Gnolls. Runed Bears could be used to hold back lower-tier enemies but could also slow down giant enemies, like Bandersnatches, for a few seconds.

BEORNINGS Have 8 or more Runed Bears in any single stage. 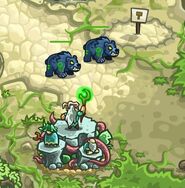 Verdant fury!
Add a photo to this gallery

View All Towers
Retrieved from "https://kingdomrushtd.fandom.com/wiki/Arch-Druid_Henge?oldid=51898"
Community content is available under CC-BY-SA unless otherwise noted.