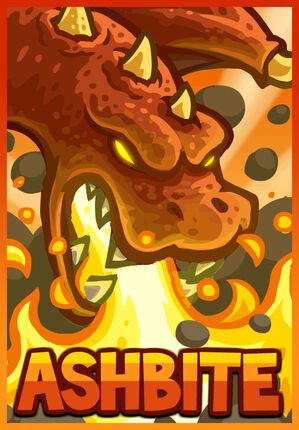 Ashbite the Dragon is a hero in Kingdom Rush: Frontiers. He costs $6.99 (50 Kreds on the Kongregate version) and starts at level 6. He levels up faster than any other hero in the game. Ashbite is vulnerable to ranged attackers, but not as much to Savage Hunters as some other ranged heroes, as he is immune to poison. He is unlocked at Emberspike Depths on the Steam version.

Nobody knows why Ashbite decided to fight alongside the Linirean army, but when a powerful and fierce dragon breathes hell over your enemies, it's good have him on your side. Anger, fire, power... just say Ashbite.

Spews forth a cone of searing flames dealing 28/42/56 damage to enemies caught in it.

Scorches the ground melting all enemies with 4/8/12 explosions of 30 damage each.

Fire based attacks set enemies on fire, burning them for 6/18/30 damage over 3 seconds.

Ashbite has a 5% health regeneration, healing at 30 health per second at level 10.

Ashbite is a hero with a counter to everything. He is best used against groups, thanks to the AOE damage he deals, but he can also hurt single, durable foes decently, as well as hold the line against a flood of faster enemies. When using Ashbite, always place him just behind your Barrack soldiers, he will quickly disintegrate the blocked foes with his fire, allowing none to leak through.

Compare to Bonehart, the other dragon, Ashbite has better individual DPS and faster recharge of skills, as well as a varied arsenal of weapons to suit different tactics. However he is inferior against large groups of foes due to the smaller AOE of his skills and lack of Unstable Disease's stacked damage. Ashbite's method of stopping enemies, Fiery Mist, is also much less reliable than Bonehart's Bone Golems, since fast enemies can still run through the mist rather quickly. Thus, it is highly advised to spend extra gold on soldiers when using Ashbite to make up for his weak stall power.

Ashbite apparently has never learned how to speak. He only roars whenever ordered to move. 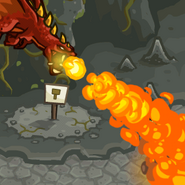 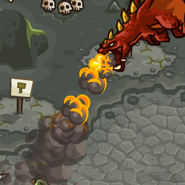 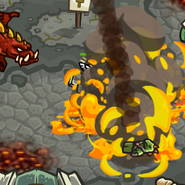 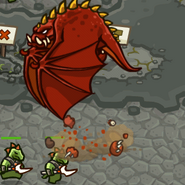 Ashbite listed as Grawl
Add a photo to this gallery
View All Heroes
Retrieved from "https://kingdomrushtd.fandom.com/wiki/Ashbite?oldid=54367"
Community content is available under CC-BY-SA unless otherwise noted.