The Assassin's Guild is a Level 4 Melee Tower in Kingdom Rush: Frontiers. It is unlocked in Stage 4, Dunes of Despair. Assassins rely on speed and stealth rather than strength to fight their enemies.

They regenerate 40 HP per second when not in combat.

"Trains agile and deadly Assassins to ambush and rob enemies."

Assassins are relatively fragile compared to their counterparts, the Templars, possessing only 200 base HP and no armor. They rely on their base 40% dodge chance (which can be improved through their Counterattack ability) to survive.

When fully upgraded, they become very capable at stalling enemies with their evasive abilities, and can fight even the toughest foes, having a small chance to Instant kill with their Sneak Attack. The Pickpocket skill also allows them to generate some extra income.

Assassins become invisible when idle, meaning that ranged enemies can't target them unless they're engaged in combat.

Attacks gain a chance to become Sneak Attacks, which deal physical damage and have a chance of instant kill.

on iOS, this ability is incorrectly described as dealing True Damage.

*: Instant kill chance is not the proportionate of Sneak Attack chance.

No action without reaction!

Improves the dodge chance of assassins and now strikes back upon a successful dodge.

I call it treasure hunting!

*Note: EHP stands for Effective HP, and factors in armor values and dodge chance to give an estimate of how much damage the unit can receive.

**Note: this assumes enemies attack all 3 Assassins every 1 second. Some enemies attack slower and this will result in less Counterattack damage being output.

DODGE THIS! Have your assassins dodge 1000 attacks. 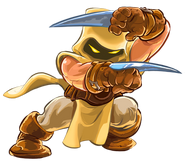 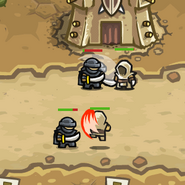 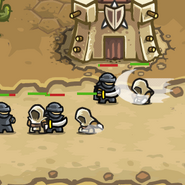 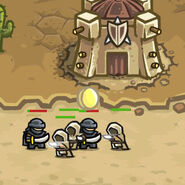 Assassins in action
Add a photo to this gallery

View All Towers
Retrieved from "https://kingdomrushtd.fandom.com/wiki/Assassin%27s_Guild?oldid=54491"
Community content is available under CC-BY-SA unless otherwise noted.