The Barbarian Mead Hall, or just Barbarian Hall, is a Level 4 Melee Tower. It trains the mighty barbarians: ruthless hunters who hack through their foes with axes, axes, and more axes! They are capable of throwing these heavy weapons, and also wield nets that slow flying enemies.

These barbarians will tear your enemies to shreds! Many fear their blood-thirsty and war-hungry attitude, but it's a good thing they're on your side...for now.

They regenerate 20 HP per second when idle.

Barbarians are savage warriors that will quickly clear a battlefield, usually at the cost of their own lives.

Barbarians are deadly but versatile troops. They are able to wield not one, but two double-bladed axes in battle (when upgraded), dealing insane amounts of damage to enemies. Throwing Axes and Hunting Nets allow them to tackle small amounts of flying enemies. In the Mobile and Steam versions, instead of Hunting Nets, Barbarians have the ability to do a Whirlwind Attack, dealing area damage within a certain radius.

Compared to the Paladins of the Holy Order, Barbarians are less durable, despite their greater HP, as they have no armor or healing abilities. However, they deal far more damage, and are able to attack from a distance and engage flying enemies.

"May our axes split our enemies in two!"

Hunters by nature, Barbarians can throw nets to slow flying enemies for a while. (Flash only)

"I got something to axe you.."

When struck, Barbarians have a chance of dealing damage to all enemies in the area. (Mobile and Steam only)

Barbarians equip an additional axe to deliver additional damage. On iOS, their attack speed is slowed down by 0.3 seconds after this upgrade.

*Note: EHP stands for Effective HP, and factors in armor values to give an estimate of how much damage the unit can receive.

**Note: this assumes enemies attack all 3 Barbarians every 1 second. Some enemies attack slower and this will result in less Whirlwind damage being output.

ARE YOU NOT ENTERTAINED? Have a single Barbarian kill 10 enemies. 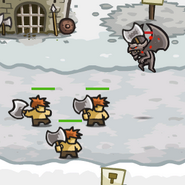 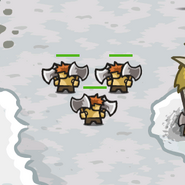 Whirlwind Attack
Add a photo to this gallery

View All Towers
Retrieved from "https://kingdomrushtd.fandom.com/wiki/Barbarian_Mead_Hall?oldid=56113"
Community content is available under CC-BY-SA unless otherwise noted.