The Battle-Mecha T200 is a Level 4 Artillery Tower in Kingdom Rush: Frontiers. The tower deploys a walking robot that drops bombs and shoots missiles.

The Battle-Mecha T200 operates similarly to a Barracks: its main functionality is from the Mecha, not the building itself. The Mecha can be controlled via rally points like Barracks and mercenaries, but cannot be attacked, cannot block enemies and has no HP. It uses a mortar as its primary attack, which has a very fast rate of fire compared to other artillery, but has a much smaller range and area of effect. It also has a minimum range which prevents the Mecha from shooting at enemies directly under it.

Compared to the other Level 4 Artillery Tower, the DWAARP, the Battle-Mecha T200 possesses a much higher single-target DPS and can attack flying enemies when Wasp Missiles is upgraded, but has a much smaller area of effect and requires some micromanagement to be used to its fullest potential.

"Down the garbage chute!"

Drops oil on the ground that slows down enemies by 70%. (Cooldown: 10 seconds)

Mecha T200 rally range
Add a photo to this gallery

MECHWARRIOR Build 3 mechas on any one stage. 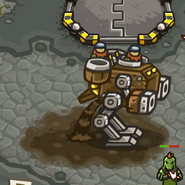 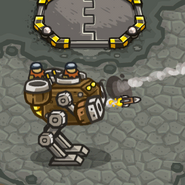 View All Towers
Retrieved from "https://kingdomrushtd.fandom.com/wiki/Battle-Mecha_T200?oldid=53078"
Community content is available under CC-BY-SA unless otherwise noted.