Beresad is a black dragon that appears in Beresad's Lair, the thirteenth level in Kingdom Rush: Frontiers.

Beresad is first seen sleeping at the opening of a cave inside his lair. Behind him is an enormous pile of gold. He cannot be attacked.

Beresad wakes up during the following waves:

(* When next waves are called instantly, a few wakeups can be skipped.)

Beresad will occasionally open his eyes and puff out smoke, then go back to sleep. During the specified waves however, he will take flight after opening his eyes and fly over one of the four 'lines' of Strategic Points on the map, breathing green fire onto them. He will then return to the entrance of his cave and go back to sleep. Any tower hit by the green fire is disabled for 6 seconds, and towers cannot be built on strategic points that are on fire.

When Beresad is busy disabling towers, it is possible to steal Gold from his hoard. A maximum of 100 gold can be stolen. Clicking the hoard once will give all 100 gold, however, it is advised to do this as soon as Beresad takes flight because if he comes back it will be interrupted. 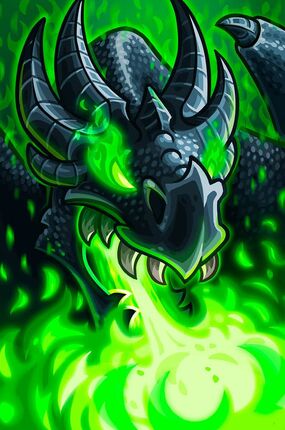 Beresad the Black Dragon is a premium hero in Kingdom Rush: Vengeance. Beresad costs $6.99 and starts at Level 5.

Beresad's devastating power could only be surpassed by his colossal greed. A promise of all the treasures held in the Dwarven Kingdom was all it took to secure this ancient dragon's dreaded might for Vez'nan's campaign.

Beresad breathes a potent blaze that scorches the ground, dealing up to 50/80/120 True Damage to all enemies standing in the flames.

Beresad growls with strength. All affected enemies run for their lives, going back through the path for 3/5/7 seconds. Beresad won't cast this spell if placed out of the path.

Spits a rock to the path and infuses it with magic to form a golem that will fight enemies for 20 seconds.

Shoots a concentrated ball of fire at an enemy, killing it instantly and causing an explosion that deals 8-12/12-18/18-24 True Damage to all enemies close to it.

Enemies killed by Beresad generate extra gold. (The description is misleading on mobile.) Specifically, each killed enemy grants two gold more than usual. The effect is as insignificant as it seems; Beresad's real power lies in his other abilities.

View All Heroes
Community content is available under CC-BY-SA unless otherwise noted.
Advertisement