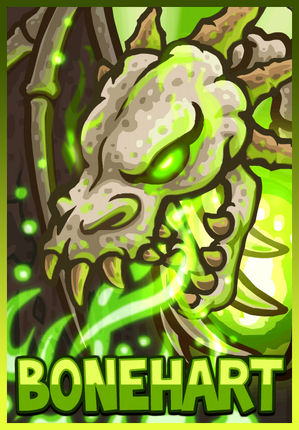 Bonehart the Dracolich is a hero in Kingdom Rush: Frontiers. He costs $6.99 on mobile and is not available on Flash. He is unlocked at Emberspike Depths on the Steam version.

Bonehart is a large, grey mass of bones in the shape of a dragon. He has powers over death, being able to curse enemies with plagues, summon the dead, and take apart his bones and reassemble them at will.

When the elves were created, the Goddess Elynie chose Faustus to protect and watch over them until the end of times, and thus she linked his soul to her most cherished treasure: the Tear of Elynie.

Faustus watched over the elves while their civilization strived and bloomed. He was there to bless the little Princess Alleria when she took her first breath. The elves, in return, respected and loved him and it was every elven wizard's dream to learn the advanced incantation techniques from him.

He remained devoted to this task until the fateful day the dreadful Spider Queen corrupted the crystal's essence and in the process, Faustus`s soul. Tainted by the dark forces, he gradually abandoned the draconian sorcery and turned into the dark magic arts, a powerful force that consumed his flesh, leaving only his bones behind. Nothing remained of the former elven protector, not even his name, as he was now known as Bonehart.

Bonehart summons a bone golem (appropriately called Wishbone) to aid him in battle for 20/30/40 seconds. No more than three golems can be active at a time.

Unleashes 6/8/10 plague carriers that infect and deal up to 60/80/100 damage to enemies in a path.
This upgrade enables Boonehart's attacks to infect enemies.

Bonehart dives into the ground, dealing 50/100/150 damage and infecting enemies caught in the blast.

Infected enemies explode when they die, dealing 30/60/90 damage and infecting nearby enemies.

If all of Bonehart's abilities are available for use, he uses them in this order:

Bonehart has a 4% health regeneration, healing at 26 health per second at level 10.

Bone Golems gain a 50% boost in damage and have their armor increased to Low if standing near a Death Knight. They also heal at 2 health per second with the Courage upgrade for barracks.

Bonehart is a hero concentrated on Crowd Control. He completely mauls grouped enemies, thanks to the massive AOE of his skills, which allows him to hurt whole crowds at once. The most important thing to learn when using Bonehart is the timing and control of his powerful skills, so as to fully extract his potential as a killing machine.

Bonehart's main playstyle is supporting your towers in a choke point by annihilating all the weak foes. He lends a hand to stall enemies with his Bone Golems, combined with allies in the area, enemies are grouped together to suffer more from his AOE attacks. In battle, quickly moving him over to the area with the most enemies will greatly increase his usefulness in killing foes.

Keep Bonehart active, as he will heal while fighting; but keep him away from enemies with powerful ranged attacks - he is a bit more durable than Ashbite but will not last long against a Saurian Savant constantly firing electricity at him.

Compared to Ashbite, the other dragon, Bonehart is vastly superior in terms of crowd control, but he is not as good in directly eliminating foes, especially more durable ones, due to his lower individual DPS, originating from weaker base damage and longer recharge of skills. However, Bonehart has better aiming with his basic attacks than Ashbite, and his abilities are also easier to use, thanks to them being able to cover a wider area than those of Ashbite.

Being the reanimated form of the dragon Faustus, Bonehart is also capable of speech. His voice also echoes with every word, an effect of the magic that has reanimated him. 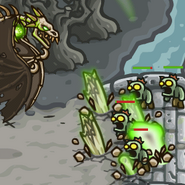 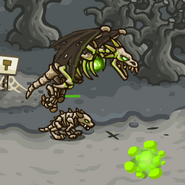 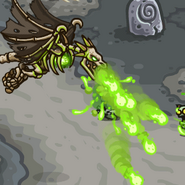 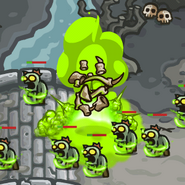 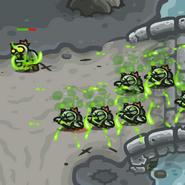 Concept Art
Add a photo to this gallery

View All Heroes
Retrieved from "https://kingdomrushtd.fandom.com/wiki/Bonehart?oldid=54087"
Community content is available under CC-BY-SA unless otherwise noted.