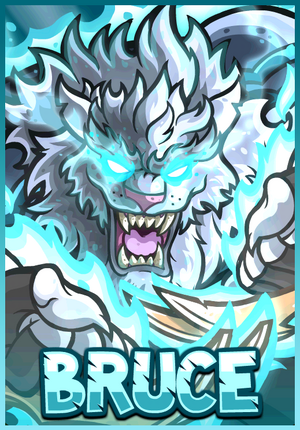 Bruce the Werelion is a Hero in Kingdom Rush: Origins. He is unlocked by paying $4.99 as an in-app purchase. He starts at level 5.

Bruce is a tall, snow-furred human-lion hybrid, otherwise known as a werelion. He has had experience with war before, indicating that he may have been a soldier in the past who was transformed, either as a reward or a curse. Either way, it is a blessing to have him in battle as he is the pinnacle of melee hero supremacy.

Bruce is a purely melee hero, dealing massive damage and being able to survive just as much damage himself.

Compared to other heroes, Bruce can tank about as well as Bravebark while dealing damage that rivals that of Reg'son. He is slow-moving, unable to catch up with a Blood Gnoll, but once he's in a location, he will make sure nobody leaves it unharmed. Usually, heroes that deal high damage will need to be retreated often, but Bruce can stay in melee the longest while still being able to kill most targets.

You're gonna hear me roar!

Protectors of the Pride
Add a photo to this gallery
View All Heroes
Retrieved from "https://kingdomrushtd.fandom.com/wiki/Bruce?oldid=55119"
Community content is available under CC-BY-SA unless otherwise noted.