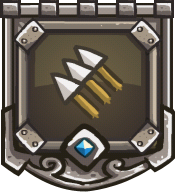 Ranged Towers, more commonly known as Archer Towers, are one of the four main tower types in Kingdom Rush. Armed with two archers, these towers fire a constant stream of arrows into enemy troops. While they may be the most basic of the four towers, they can quickly become a powerful force and are not to be underestimated.

Ranged Towers do the least damage out of all the towers, but their fast attack rates makes up for it. Their cheap cost allows for large numbers of these towers to be built. Ranged Towers are generally good at fighting against multiple enemies. Their fast rates allows them to target slow enemies and flying creatures, making them essential for nearly every level. However, their attacks can be significantly reduced by armored enemies. Ranged Towers are not known for their accuracy, and fast creatures can dodge the arrows.

There are five Ranged Towers in the first three Kingdom Rush games:

The three non-specialized towers differ in each game but have the same purpose. Each upgrades a stage further before offering a split choice between two new towers with additional upgrades to further boost the towers offensive and defensive capabilities.

In KIngdom Rush: Vengeance, there are three ranged towers, each with four levels. The fourth level unlocks abilities.

Rangers Hideouts are the fastest attacking tower in the game. The tower specializes in creature control and slowing down ground-based enemies. For that reason, the Rangers Hideout makes it one of the second to best creature control towers, behind the Artillery towers. There are two skills that can be unlocked by this tower: Poison Arrows and Wrath of the Forest. Poison Arrows allow your towers to do extra damage to creatures that have been damaged by the arrows. Wrath of the Forest summons thorns and vines that trap, damage, and stop nearby ground-based enemies. This spell is commonly used in conjunction with the Arcane Wizard's Teleport, so that the root can hold down enemies, while the Arcane has time to recharge its teleport. These skills often do not prove to be deadly against multiple strong enemies, however. They perform really well against trolls because their fast attack rate doesn't let them regenerate, however the Rangers Hideout does not do well against multiple heavy armored creatures such as Marauders or Dark Slayers.

Musketeer Garrisons have the longest attack range in the game. They has the slowest attack rate of the Ranged Towers, but also the most damage per shot. The tower specializes in taking down big and powerful individual enemies rather than multiple weaker enemies due to its slow rate (do note that Rangers Hideout actually have a higher DPS). It has the same firing rate as the Sorcerer Mage tower, but it's attack is slightly weaker and cannot penetrate physical armor. It is often used for taking down enemies with 1 or 2 shots as one of the best defenses is a good offense. One of their skills, Sniper Shot, can completely kill an entire enemy regardless of armor or health. However, this does not work on Bosses and will instead deal heavy damage and has a very slow reload time. Their second skill Shrapnel Shot, which allows the tower to deal area damage. This ability is among the most powerful in the game, dealing up to 600 area damage, but it is also very expensive. Musketeers do a considerable amount of damage when upgraded, but their firing rate is slow when compared to area damaging Artillery towers. They are great, but can be easily overrun by large waves of enemies.

Crossbow Fort archers have the ability to shoot low damaging arrows but at a speedy rate meaning they can take down enemies with low to medium health with ease as well as the ones with magic resistance. They do struggle with armor but one of their skills, Barrage, enables them to take down even moderately armored enemies. Their higher range, the highest of the towers in Kingdom Rush: Frontiers, enables them to snipe at enemies for a longer time than most and this large range can be extended by using the Falconer skill which also boosts the attack range of surrounding towers. This allows them to be used to their fullest potential, even in Strategic Points very far from the path, especially in the Rising Tides mini-campaign. When fully upgraded, Barrage deals 350 damage on average, allowing it to take down even the toughest enemies such as the Gorillon.

Tribal Axethrowers have high damaging axes that take down low and medium health enemies with ease. They have a slower rate of fire and smaller range than the Crossbow Fort but make up for it with their helpful skills and higher damaging shots. Able to take on waves of low health enemies such as Jungle Spiders, they are particularly useful against Jungle Matriarchs since their axes can kill a spiderling in one shot. Their most offensive and expensive skill, Totem of Weakness, conjures a totem to halve nearby enemies' damage output as well as making them take 40% extra damage from all sources for up to 9 seconds. Their more 'passive' skill, Totem of Spirits, gets rid of the magical abilities of enemies such as The Shamans, Witch Doctors, Blood Tricksters, Saurian Nightscales, Saurian Savants, Blacksurges, Bluegales, Lycans, etc... but it does not get rid of magical ranged attacks. These wild people are best at choke points so as to use their totems amidst the enemies and use them to help out other towers such as Crossbow Forts and Archmages.

Arcane Archers are elvish marksmen that lay a hail of magical arrows at nearby enemies, rapidly calving away any magic resistance their targets possess. With the unique ability to fire at up to two enemies at once, these archers are adept at taking out multiple weak foes. Their first ability, Burst Arrow, launches a charged magic shot every once in a while, dealing heavy magic damage to a wide area on the ground or in the air. This skill can quickly cripple or wipe out an entire wave of enemies, and provides some needed damage to whittle down tougher foes. The second ability of the Arcane Archers is Slumber Arrow, a soporific shot that puts any non-boss enemy to sleep for a period of 4 seconds, effectively removing it from play within that time. Further upgrades reduce the recharge of the shot by up to 8 seconds, making the skill activate much more frequently. The Arcane Archers are known for their role as jacks-of-all-trades, having something to deal with anything, whether 'anything' is a scrambling horde, or a really durable, annoying enemy.

Golden Longbows are special, solitary archers on high watchtowers overseeing the entire battlefield. Armed with a powerful, enchanted bow, mighty arrows and lethal accuracy, the Golden Longbow takes carefully aimed shots at enemies from way across the map, dealing the most damage-per-shot of all Ranged Towers in the franchise. Boasting the longest range of all towers in Kingdom Rush: Origins, the Golden Longbow can easily lend hand to multiple choke points at once, as well as catching any strayed enemy. Unlike the regular sniper, the Golden Longbow is not without good self-defense: At close range, he fires twice as fast, dealing one third of the damage per arrow. However, it is the Golden Longbow's arsenal of skills that makes his famous. His most notable ability, Crimson Sentence, grants each of his shots a killing chance, albeit for a hefty amount of gold - 300 for each tier, totaling up to 900 gold to fully upgrade it. This ability allows the Golden Longbow to tackle almost all kind of foes: sniping out threats when they have just appeared, slaying a beast to ease the pressure on a hot spot, or a lucky shot to kill a leaked enemy. The skill is not especially powerful at close range when the Golden Longbows are firing quickly, as its chance is halved. The Golden Longbow's second ability is not any less powerful. Hunter's Mark enchants an arrow to double any damage that its target suffers from any sources for a period of 5/10/15 seconds, at tier I, II and III, respectively. Marked with this effect is effectively a death sentence to said enemy - unless it is a very strong foe, it is not going to stand until the duration ends. Both of the Golden Longbow's skills make him well-suited to deal with powerful foes, wearing it down for other towers to destroy. The Golden Longbow's usefulness is much reduced against floods of enemies, which can easily overrun him.