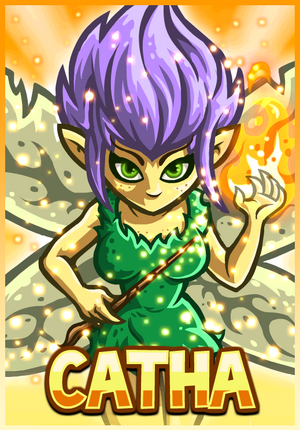 Catha the Pixie is a Hero in Kingdom Rush: Origins. She's unlocked at Gryphon Point on Steam and Rockhenge on Mobile. She starts at Level 4.

Fairies are timid creatures who play and laugh around ancient and mystical oaks. Catha laughs but she is not playing by any means. She is fierce and fearlessly determined to follow the path of Sanha, the great Fae champion. Besides healing her allies, she wields and throws harmful magical thorns able to put her enemies to sleep. With her fairy dust she creates many copies of herself becoming the worst nightmare of every villain.

Summons 2/3/4 pixie warriors with improved health to block and fight enemies for 10 seconds.

† In ranged, each Pixie deals the same damage as Catha in ranged.

A quick spell that stuns all enemies in an area for 3/4.5/6* seconds. Bosses are affected for a half of the duration.
(*The description is incorrect on iOS, saying 8 seconds at level 3.*)

Values in level 1-3 are for Humble Bundle version.

Catha's range
Add a photo to this gallery 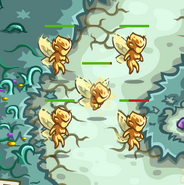 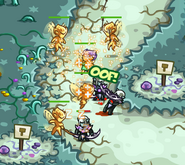 The Fae and the Furious 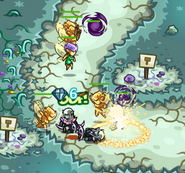 Sleepy time
Add a photo to this gallery

View All Heroes
Retrieved from "https://kingdomrushtd.fandom.com/wiki/Catha?oldid=54725"
Community content is available under CC-BY-SA unless otherwise noted.