Infernal Combustion
Area damage
Cerberus are giant three-headed Demon Hounds with heavy armor in the form of osteoderms. They serve as a mini-boss in Pit of Fire and in Pandaemonium.

Three headed hounds with very thick skin, they can devour scores of soldiers.

Cerberus possess the stats and abilities of a giant enemy without all the flaws of other giant enemies. They are extremely tough, boasting a whopping 6000 health and High physical armor; even Bloodshells from Frontiers can barely match them in durability, and they can quickly mow down soldiers with their three mouths. Unlike other giant enemies, they run super fast (only their smaller canine cousins are faster), making Earth Elemental even more essential against them. They are also classified as a mini-boss, meaning that they are immune to Death Ray, Teleport, Polymorph, Sniper Shot, and Wrath of the Forest. Even though Cerberus usually does not come with minions, they are still one of the most, if not the most, powerful and terrifying enemies in the Kingdom Rush series. 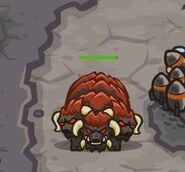 The three heads of Cerberus