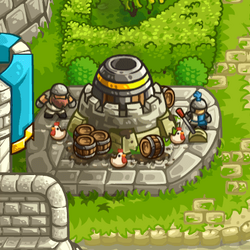 The cannons, modelled after the Dwarf bombard 500mm Big Bertha from Kingdom Rush sit outside Denas's castle entrance. In the Campaign, the only appear in the second part of the battle (beginning of wave 9), once Vez'nan has destroyed the outer city walls. In Iron Challenge and Heroic Challenge they appear from the start. 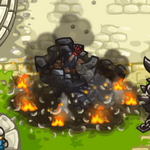 The cannons will launch barrels at random towers, covering them in a burning mixture of tar and feathers. While they are covered, the tower cannot be interacted with, nor will it attack or use any of its skills. There are a few exceptions to this, however. A rally point in use on a tower will negate the inability to attack, as it's only the tower base that is affected by the tar, but they cannot be repositioned.

A tarred and feathered tower can be cleaned up by tapping on it and purchasing the soapy bucket on offer. This immediately fixes the tower, allowing it to re-spawn defeated troops and start attacking again.

Purchasing a soapy bucket costs 125 gold in the Campaign and Heroic Challenge, but only 30 gold in the Iron Challenge. In the Campaign, a tower will remain covered for 40 seconds, meaning that gold can be saved if a less important tower is hit. In the Heroic and Iron Challenges, a tower will remain covered until it is cleaned, so it is recommended to uncover the strongest towers first.

Retrieved from "https://kingdomrushtd.fandom.com/wiki/Courtyard_Cannons?oldid=52756"
Community content is available under CC-BY-SA unless otherwise noted.