The Crossbow Fort is an advanced Ranged Tower that appears in Kingdom Rush: Frontiers. It shoots farther and faster than the Tribal Axethrowers but deals less individual damage per shot.

"Trained under monastic discipline, these crossbow furies are masters of their craft."

The Crossbow Fort is a highly versatile unit that not only offers strong ranged DPS, but also can significantly boost all towers in range.

The Crossbow Fort has great range, and while less powerful than the Tribal Axethrowers it can deal its damage over a longer period of time. However, what distinguishes the Crossbow Fort are its great abilities.

Barrage has huge damage output, quickly firing a set of bolts that deal moderately high damage. The neat thing about this is that they can retarget nearby foes, offering useful crowd control, and also that barrage has a short cooldown. This practically doubles the Crossbow Fort's DPS, letting it readily weaken lesser foes or punch a hole in a bulkier fiend's health.

It's worth noting that without its abilities, the Crossbow Fort is not particularly useful. Furthermore, while Barrage is strong and deals heavy damage, it is still physical, making it much weaker against armored foes. On top of that, Barrage has limited range when it comes to retargeting, potentially leading to missed shots if foes are spread out.

Shoots bolts in quick succession that deal 30-40 damage each. It can change to a new target within a limited angle. (Cooldown: 5 seconds - once after 10 basic attacks)

Gains a chance to deal double damage and improves attack range of all towers (including itself) in its range.

This effect does not stack.

Falconer Upgrade 0 to I

Falconer Upgrade I to II

Falconer Upgrade II to III
Add a photo to this gallery

BOLT OUT THE SUN Have the Crossbow Forts shoot 10000 bolts. 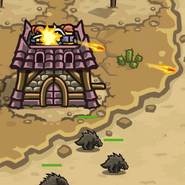 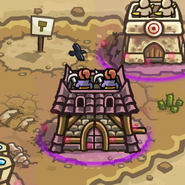 changes in range with Falconer
Add a photo to this gallery

View All Towers
Retrieved from "https://kingdomrushtd.fandom.com/wiki/Crossbow_Fort?oldid=53800"
Community content is available under CC-BY-SA unless otherwise noted.