The DWAARP, short for Drilling Weaponized Auto-Attack Rumble Platform, is a Level 4 Dwarven Bombard in Kingdom Rush: Frontiers. It creates localized earthquakes that deal damage to enemies and slow down them by 60% for 0.4 second in its area of effect. Its single-target DPS is low but it compensates for this with its wide area of effect, dealing damage to all grounded enemies in its range.

"The pinnacle of dwarven mining, its quakes damage and slow all enemies around it."

Forgoing the cannons of the basic towers, the DWAARP instead uses a giant mining apparatus as its primary weapon, dealing damage to all enemies in its range. However, it possesses terrible single-target DPS, the lowest among the advanced towers, and even lower than the Level 3 Dwarven Howitzer, making it ill-suited against individual targets with high armor or HP.

Compared to the other Level 4 Artillery Tower, the Battle-Mecha T200, the DWAARP is better against large numbers of spread-out enemies (especially when it covers multiple paths) due to its much wider range. However, it is less effective against more durable enemies.

Sends an automated mining drill towards an enemy*, reducing it to a mound of gibs.

Burns all enemies in close range over 4 seconds. (Cooldown: 15 seconds - once every 5 attacks)

A rotating beacon on the tower flashes red when the ability is ready.

*: The affliction lasts for an extra 1 second. Therefore, enemies are burnt for 5 seconds at most.

DEATH FROM BELOW Kill 100 enemies with the drill.

POPULAR BBQ Set 20 enemies on fire at the same time. 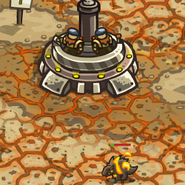 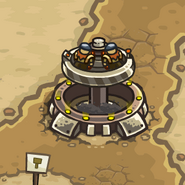 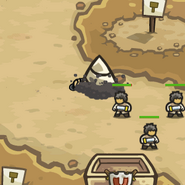 DWAARP in action
Add a photo to this gallery

View All Towers
Retrieved from "https://kingdomrushtd.fandom.com/wiki/DWAARP?oldid=53903"
Community content is available under CC-BY-SA unless otherwise noted.