Dark Knights are slow, durable, and heavily armored enemies. They are stronger versions of the Brigand, usually appearing as numbers just as often. 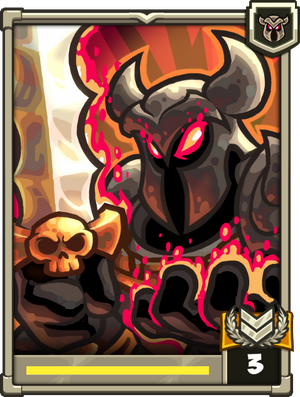 Dark Knights are the backbone of the Dark army. Having traded their vitality for great unholy powers, they have resorted to wearing heavy armor to compensate for their poor constitution.

Dark Knight is the sixth Companion to be unlocked in Legends of Kingdom Rush. He is made available by unlocking the I Fought The Law achievement.

We came across a camper during our travels.

This unit has +2 armor for this turn.

The Dark Knight also appears as an enemy in Krum'Thak's Dominion. They appear in a unique challenge triggered by encountering a Dark Knight node on the map. If you do not have a member of Vez'nan's army in your party (Asra for example) they will attempt to pilfer potions from you, upon which you have options to fight them. Defeating them without any casualties unlocks the I fought the law achievement and the Dark Knight as a companion.