The Dark Knights are the second Melee Tower to be introduced in Kingdom Rush: Vengeance, and is unlocked at the start of Bolgur's Throne. These soldiers, though limited in number (only two are trained per barracks), are fairly resilient and deal a respectable amount of damage.

These elite knights traded the taint of corruption for great power. Fighting in pairs, their full plates make them almost impervious to physical damage.

"I am your executioner!"

Dark Knights have a chance of executing their enemy every time they hit.

"What you give is what you get!"

Dark Knights reflect damage for each melee attack they receive.

"Immovable as a mountain."

Dark Knight are made for tanking, not general stalling. The kit they have is made for holding strong enemies and trade back the damage they dealt. 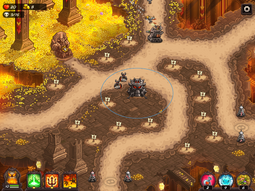 FEAST ON THIS! (30 gems) Execute 81 enemies with the chainsaw sword.

View All Towers
Retrieved from "https://kingdomrushtd.fandom.com/wiki/Dark_Knights?oldid=54407"
Community content is available under CC-BY-SA unless otherwise noted.