Deep in the black heart of the forest, we've found the root of this evil. Vasile has risen from his slumber! Vasile once more wields his dark power! Vasile, the ancient vampire prince long thought vanquished!

From his mansion, this ancestral foe commands his army of darkness, hoping to turn your troops into a vampiric legion in his thrall. Let us shed light over this darkness, and end this dark night... for Linirea!

Dusk Chateau is the twenty-first stage in Kingdom Rush: Frontiers and the third and final stage in the Shadowmoon mini-campaign. The secondary hero Lucrezia appears in this stage.

During Wave 15, the Lycans will all appear at the very end, coinciding with the Full Moon effect. This will then stay in effect until the level is over.

Following completion of Wave 15, Vasile will enter from the North and follow the western path. When defeated, he will return to the northern entrance then follow the eastern path.

After Vasile's defeat, all enemies on the map will die, however, any Vampiresa still in flight will not be affected and will still need to be beaten before the level can end.

DEAD AND LOVING IT Defeat Vasile, the Everlasting Prince

Jason's Mask and the Umbrella logo 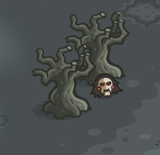 Dusk Chateau scare tour
Add a photo to this gallery
Retrieved from "https://kingdomrushtd.fandom.com/wiki/Dusk_Chateau?oldid=54801"
Community content is available under CC-BY-SA unless otherwise noted.