The Elder Shaman leads the orcish horde in the Rage Valley, and oversees the battle from his private compound.

The Elder Shaman is a shaman wearing a mask and holding a staff with a skull on it. Next to him someone wearing a skull mask beats a drum in a ritual. He taunts you with a grasp of the English language like no other goblin, orc, ogre, zombie, or troll has and casts spells designed to help his troops and hinder yours.

The first is a Healing Totem, a straight winged staff emitting an orange glow. Any enemies that pass by the totem are subject to its healing aura.

The second is a Speed Totem, a curved winged staff emitting a blue glow. Enemies that pass by it are subject to its speeding aura, and move twice as fast for a few seconds.

The third is a Fire Totem, a horned staff bearing a sinister face and emitting a red glow. The totem appears amongst your troops and immediately causes any soldiers or heroes to start to burn. 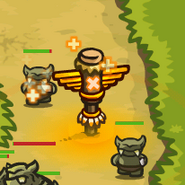 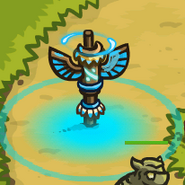 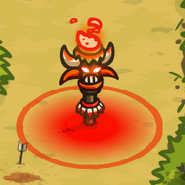 Fire Totem
Add a photo to this gallery
Retrieved from "https://kingdomrushtd.fandom.com/wiki/Elder_Shaman?oldid=52063"
Community content is available under CC-BY-SA unless otherwise noted.