Elora Wintersong is a hero unit in Kingdom Rush. She must be unlocked by buying the Premium Content or purchased with $2.99 (iOS and Android).

If magic was made of ice, it would melt, run through her veins, and freeze again. Good, but merciless, she will freeze and shatter any who cross her!

Slows ground enemies by 80% in a line from Elora for 2 seconds. (Cooldown: 8 seconds) 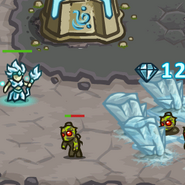 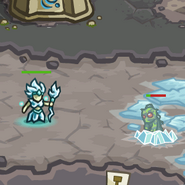 Elora in action
Add a photo to this gallery

View All Heroes
Retrieved from "https://kingdomrushtd.fandom.com/wiki/Elora_Wintersong?oldid=54261"
Community content is available under CC-BY-SA unless otherwise noted.