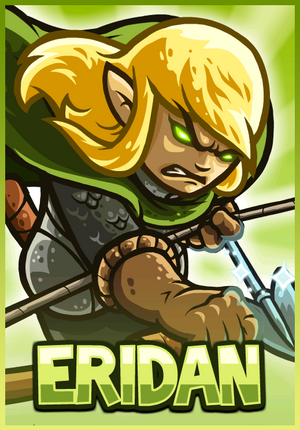 Eridan the Ranger is a hero in Kingdom Rush: Origins. Eridan was the first hero to be revealed in a short pre-release trailer. As the first hero, he starts at level 1.

Eridan comes from a long lineage of magic wielders. He was outcasted by his eldest brother Arivan, for embracing the hard life of a ranger. Despite that, he became a legend for his outstanding archery and fencing skills. His Twin Blades ended many enemy incursions and numerous hordes of ravaging monsters have fell to his Rain of Arrows. Some whisper that his gallardy has impressed a brave elven princess.

Eridan is the first free hero available to players. He starts out at Level 1, and is unlocked on the fourth wave of Gray Ravens. He has a fast rate of fire and deals decent melee damage. Eridan is an good choice of hero, because not only does he deal huge amounts of damage with his bow, but his melee damage, fully upgraded, can destroy most enemies in a matter of seconds. Not only that, but his Nimble Fencer upgrade can make him very difficult to kill, along with Medium armor.

Much was said in the past about Eridan and Alleria. Some said they were siblings, others, they were lovers. The truth is, that this is a story about secrets and missed opportunities.

Eridan and Alleria did not grow up together; she was a princess, daughter of the mighty Elven king, while he was destined to be a magic wielder, like his parents and brother before him.

He visited the Elven castle often, as he was the apprentice of one of the court's wizards, and it was during one of the practices when he first saw the young princess Alleria and hopelessly fell in love with her.

He thought that a princess would never look twice at an apprentice, so he kept his feelings for himself and decided to become a hero to win her affection, so he abandoned magic and embraced the hard life of a ranger.

He soon became a legend for his outstanding archery and fencing skills. His Twin Blades ended many enemy incursions and numerous hordes of ravaging monsters felled to his Rain of Arrows.

When the Twilight elves attacked the elven kingdom, he fought his way to Alleria's side, not only because he had vouched to protect the royal family but because his heart longed to see her. Even knowing she had to travel far away for her safety, he fulfilled his duties without hesitation and watched her disappear in the horizon, not knowing if and when she was going to be able to return.

Alleria remained as the ambassador for the Elves in the foreign lands of Linirea (it's rumored that she fell in love with a human who was later killed on the battlefield) and Eridan as the protector of the elven realm. Truth be told, he always wondered what could have happened if he had mustered the courage to open his heart to her.

Deals 1/2/3 bonus damage up to a maximum of 3/6/9 for each consecutive arrow on the same target.

Eridan's main focus is Crowd Control, taking down large groups of low-health minions. His quick basic attacks are good for taking down groups of weaker, unarmored enemies, such as gnolls, very efficiently, making him a great hero in many earlier levels. But where he really shines are his diverse skills, which can help him excel at both melee and ranged combat.

Regardless of whether the player prioritizes Eridan's melee or ranged skills, his Hero Spell, Arrow Storm, should be upgraded quickly because it is truly an amazing hero spell to have: on earlier levels in which hordes of weak enemies are often present, a fully upgraded Arrow Storm is almost like having a second Thunderbolt. Its wide AOE and short cooldown make it a very versatile skill.

Eridan's range
Add a photo to this gallery 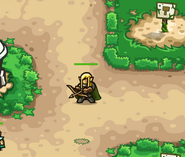 Swords come out to play 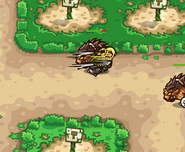 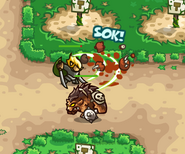 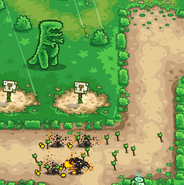 Blot out the sun!

Eridan in the Origins intro
Add a photo to this gallery

View All Heroes
Retrieved from "https://kingdomrushtd.fandom.com/wiki/Eridan?oldid=54450"
Community content is available under CC-BY-SA unless otherwise noted.