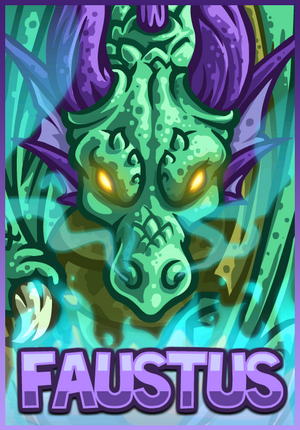 Faustus the Dragon Mage is a Hero in Kingdom Rush: Origins. He is unlocked by paying $6.99 as an in-app purchase and at the Shrine of Elynie on Steam. He starts at level 5.

Tales say he was a close friend of the goddess Elynie, others claim that the Draco constellation lost a star the night he was born. Legends go far beyond that saying that he is the eternal protector of the elves, meant to watch out for them until the end of times. Whichever the truth is, Faustus has unlocked almost all the secrets of draconian sorcery, one still remains a mystery.

When the elves were created, the Goddess Elynie chose Faustus to protect and watch over them until the end of times, and thus she linked his soul to her most cherished treasure: the Tear of Elynie.

Faustus watched over the elves while their civilization strived and bloomed. He was there to bless the little Princess Alleria when she took her first breath. The elves, in return, respected and loved him and it was every elven wizard's dream to learn the advanced incantation techniques from him.

He remained devoted to this task until the fateful day the dreadful Spider Queen corrupted the crystal's essence and in the process, Faustus`s soul. Tainted by the dark forces, he gradually abandoned the draconian sorcery and turned into the dark magic arts, a powerful force that consumed his flesh, leaving only his bones behind. Nothing remained of the former elven protector, not even his name, as he was now known as Bonehart.

Invoking a rune of power, Faustus teleports up to 2/4/6 enemies 35 node back down the path.

An arcane seal that nullifies 1/2/3 enemies magical abilities for 6/8/12 seconds.

Faustus's range
Add a photo to this gallery

Chilling out in the sky 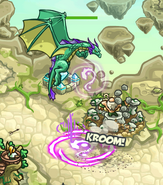 Go back from whence you came 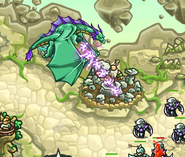 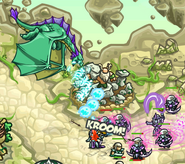 A draconic attack
Add a photo to this gallery
View All Heroes
Retrieved from "https://kingdomrushtd.fandom.com/wiki/Faustus?oldid=54712"
Community content is available under CC-BY-SA unless otherwise noted.