Gerald Lightseeker is a hero in Kingdom Rush that represents the Barracks upgrade path. He was the first hero to be unveiled by Ironhide Studios. He is one of the four melee heroes and one of the three free heroes. On the Steam version and mobile version, Gerald is unlocked after completing Pagras, the third level of the main campaign level.

Defender of the righteous, punisher of the dark, protector of the innocent, crusher of evil beings, Gerald Lightseeker is the uncanny of Linirea's armed forces! His sword swings with class and elegance, his armor shines like the sun itself, his cape shakes with pure hope, ladies faint at the sight of his presence.

Three hoorays and a mug of light beer for Gerald Lightseeker, hero of Linirea!

Learnt at Level 2. Gerald Lightseeker will strengthen units in an AoE around him (requires at least two allies that are engaging melee combat near him). Affected Units will emit a blue aura below their feet. This skill has a duration of 6 seconds. (Cooldown: 8 seconds)

Learnt at level 4. Once used, Gerald Lightseeker will reflect enemy damage to the source, dealing True Damage. It can't be used against enemies with an area attack ability (except Cerberus and Lord Blackburn), which include the Yeti, Magma Elemental, Forest Troll, Troll Breaker, Swamp Thing and most Bosses. Ranged attacks or a demon's infernal combustion also cannot be blocked. The rate of triggering this skill increases as Gerald's level increases. At Level 10, this skill greatly enhances Gerald's durability and allows him to kill enemies with high armor or even physical damage immunity. On flash, it is bugged that the Shield of Retribution reflects no damage while Gerald himself receives no damage from enemies either.

Gerald is a pure melee hero, which means he could not attack flying enemies. Do not send Gerald towards a lane that has mostly flying enemies on it.

Bear in mind melee heroes are vulnerable to ranged enemies, so get reinforcements or your own units to deter that threat.

Gerald works great at defending, yet he has great potential for tanking and controlling a path of enemies by himself. Do not hesitate to bring him alongside Reinforcements, to face tank enemies or a horde of weaker mobs.

Retreat only when the waves get harder or the lane(s) where you sent Gerald starts to get overwhelmed. Better to retreat back to where your units are stationed to give him a chance to see another wave.

Against enemies with a high, non-area attack (such as Dark Slayers, Sons of Sarelgaz, Fallen Knights, Lycans etc.), Shield of Retribution can be used to great effect. Furthermore, it deals True Damage, making it perfect against heavily armored enemies like Dark Slayers, Raiders and Spectral Knights. At level 10, Gerald can even kill Gul'Thak and Myconid quite easily, as they lack an area attack.

Against bosses without instant-kill mechanisms; like The Juggernaut or Gul'Thak; Gerald could easily tank against them, allowing extra delay time, However, retreat as soon as possible to prevent the boss from dealing the death blow on your hero. Call Reinforcements and/or making use of units would significantly delay the boss from reaching its goal, allowing towers to deal significant damage to the boss.

Against bosses with instant-kill mechanisms; such as J.T., Vez'nan or Sarelgaz; sending Gerald against the boss would be a pointless move resulting in his immediate death, worsening the situation. Rather, send him to defend your final choke points, fending off enemies while your towers deal with the boss. 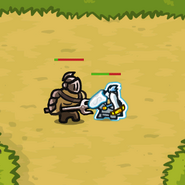 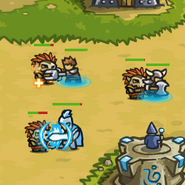 At the start of the stage, Gerald is confident that his men can defeat Vez'nan's forces, so he chooses to sunbathe on the top of his barracks while being served by a valet. If the player can slaughter enough of his men and survive to wave 15, he (finally) decides to fight, descends through the barracks and emerges fully armored and ready for battle.

As the fight takes place in the penultimate stage, Gerald is a fairly simple boss. He heals himself by 100 and 300 when the health is below 50% and 25% respectively. But, when having enough troops around him, Gerald activates his Courage ability which gives his men +80% armor over a few seconds. When defeated, he'll be imprisoned by Vez'nan's Magic Shackles spell.

Returning to Lightseeker Camp on Heroic Challenge or Iron Challenge find Goblins have taken over the barracks; throwing the shield to the ground and decorating it with party banners; and are enjoying BBQ and drinks with the valet. 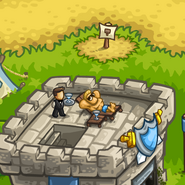 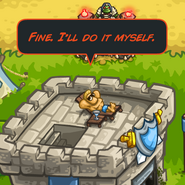 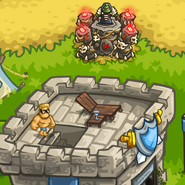 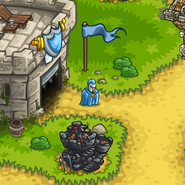 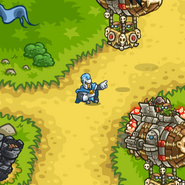 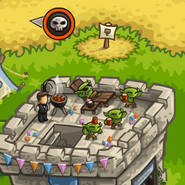 Sir Gerald Lightseeker, mighty paladin from Linirea, uses his holy powers once again to protect these lands from a recent unknown menace.

Gerald Lightseeker is the first Legend in Legends of Kingdom Rush. He is the player's starting Hero and is introduced at the beginning of the game.

Gerald is heavily chained and locked in one of the castle's dungeons on Vez'nan's orders. Asra Daggerfall appears and quickly unlocks his chains, leaving a leather bag filled with weaponry. Gerald asks who she is and what is going on, but she says there isn't enough time to explain, and swiftly exits the dungeon wishing him goodluck.

As he gears up, he looks out of his cell and notices there is only one guard assigned to his watch. He smirks, remarking that they will regret making it easy for him to escape. The tutorial begins, and the game instructs the player on the combat mechanics and directs the player to slay the guard. Gerald leaves the dungeon and advances around the castle, and the player is introduced to the first story choice of the game. Gerald sees a captured Ranger in a cell. With his strength Gerald managed to free the Ranger from the cell, and then the two wanders out the citadel. As they travel more, they met a Wizard who is bored of Vez'nan's dynasty. Together, the trio fight the guards and managed to escape the army clutches, just for another adventure awaits them outside...

This unit has +2 armor for this turn.