Greenmuck, also called Rotten Boss on the Steam version, is the boss of the elite level Rotten Forest in Kingdom Rush.

The heart of the Rotten Forest and its source of corruption.

He is a larger and more powerful version of the Tainted Treant, the only difference (aside from minor appearance changes) is the large acid pool on top of his head. Greenmuck is similar to other bosses except for a new attack which rains slime balls onto your soldiers anywhere on the map.

LUMBERJACK Defeat Greenmuck and his minions. 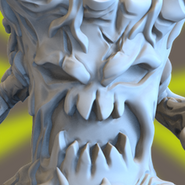 View All Enemies
Retrieved from "https://kingdomrushtd.fandom.com/wiki/Greenmuck?oldid=52395"
Community content is available under CC-BY-SA unless otherwise noted.