Gryphon Riders are a special unit that only appears in Gryphon Point.

When a Gryphon Rider first appears, he'll fly from off the map, raining fire on enemies that deal 10-20 damage each before perching on one of the two vantage points. When tapped on, a Gryphon Rider will take flight, attacking enemies below him, then will return to the perch after a few waves. One perch is on the left side, and another is on the right side. The left side one will burn enemies on the bottom horizontal lane. The right side one will burn all enemies in its way as it heads towards the upper left hand corner. 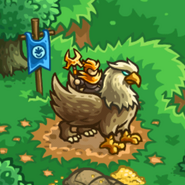 Gryphon Rider on vantage point
Add a photo to this gallery

View All Towers
Retrieved from "https://kingdomrushtd.fandom.com/wiki/Gryphon_Rider?oldid=54771"
Community content is available under CC-BY-SA unless otherwise noted.