Hacksaw is a hero in the mobile and Steam versions of Kingdom Rush. He is unlocked by paying $4,99 as an in-app purchase (iOS) or by finishing Forsaken Valley (Steam).

For a Gnomish inventor, giant oak trees or colossal foes make no difference. Riding in his Mechanical Marvel/Contraption, he can shred anything in his path. Gangway... Gnome behind the wheel!

Hacksaw himself is tiny, not even able to stand eye to eye with a goblin. Yet in his mechanical suit he is as wide as a Forest Troll and armed to the teeth. What he lacks in speed he makes up with brilliant invention and raw power.

Learnt at level 2. Throws a blade that bounces off several enemies dealing 45 true damage for each hit. Cooldown: 8 seconds.

Learnt at level 4. Instantly kills an enemy with a drill.

Hacksaw in his suit 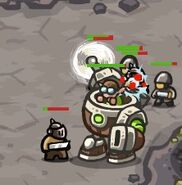 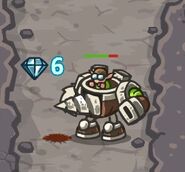 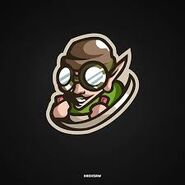 Hacksaw design
Add a photo to this gallery

View All Heroes
Retrieved from "https://kingdomrushtd.fandom.com/wiki/Hacksaw?oldid=54714"
Community content is available under CC-BY-SA unless otherwise noted.