Phases enemies out of the battlefield for 5 seconds, dealing magical damage. (Cooldown: 16 seconds)

Summons magic sentinels that seek and attack nearby enemies at long range.

Sentinels have about twice the range of the High Elven Mage itself. First, Sentinels start circling around the mage for 4 seconds to charge energy. Charged and ready Sentinels start to seek and attack targets, shooting 10 bolts over 5 seconds. This cycle takes 10 seconds.

PHANTOM ZONED Keep enemies out of time for a total of 1000 seconds. 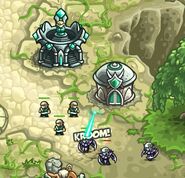 Arcane Sentinel
Add a photo to this gallery

View All Towers
Retrieved from "https://kingdomrushtd.fandom.com/wiki/High_Elven_Mage?oldid=52162"
Community content is available under CC-BY-SA unless otherwise noted.