Ignus is a hero that corresponds to the Rain of Fire upgrade path. In order to be used, he has to be purchased for $0.99 (mobile versions), the players has to have Premium Content (Flash version) or by completing The Wastes (Steam version).

Burn The Kingdom's enemies with the blaze of a thousand stars! Forge victory in his raging flames. Consuming evil in fire and brimstone!

Ignus rushes towards an enemy on the front line in a fireball. The fireball deals damage to enemy units that come in its path. Upon reaching the target Ignus would commence melee combat as normal. This skill won't work if the initial target is too far from Ignus, instead targeting the furthest enemy from the skill range. (Cooldown: 4 seconds)

He gets a 25% chance to emit a shockwave dealing damage and healing himself by 20% of the max health. (Passive) 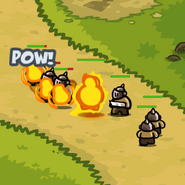 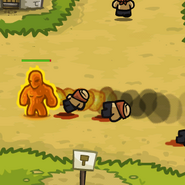 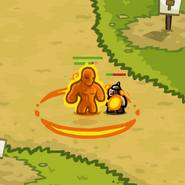 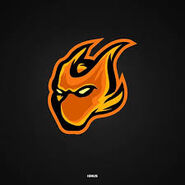 View All Heroes
Retrieved from "https://kingdomrushtd.fandom.com/wiki/Ignus?oldid=53851"
Community content is available under CC-BY-SA unless otherwise noted.