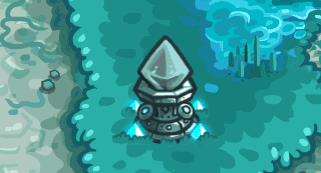 The Infusion Crystal appears in Anurian Plaza and Pond of the Sage.

A seemingly harmless part of the scenery, the Infusion Crystal reacts only to the magical influence of an Anurian Infuser. If one of these magic specialists gets close, they are able to infuse their essence into said crystal. After a few seconds, the gem absorbs the energy and sends it up into the heavens, only for it to strike down a few seconds later, disabling a Tower.

Anurian Infusers should be kept away from these to the best of the player's ability. Only one Infuser can attempt to charge it at a time and it takes a few seconds for it to be successful, so if the player sees this occur, some Goonies can be placed into melee range to make them abort their attempt.

Placing a Melting Furnace nearby can be very useful as an Infuser will abort their attempt to infuse the crystal if they are stunned by the shockwave. At maximum level it should stun them for long enough to prevent any Infuser from being successful.

Retrieved from "https://kingdomrushtd.fandom.com/wiki/Infusion_Crystal?oldid=52181"
Community content is available under CC-BY-SA unless otherwise noted.