Ingvar Bearclaw is a hero in Kingdom Rush. He is unlocked by buying the Premium Content (on Flash), by being purchased with $2.99 (on mobile) or by completing Forsaken Valley (on Steam).

A warrior from the north, he commands the might of a bear and the aid of his ancestors!

Ingvar turns into a bear, dealing more damage, gaining invincibility, regenerating 2 health points per second even while in combat and regenerating health faster, but cannot use Ancestor Call. (Cooldown: 20 seconds) 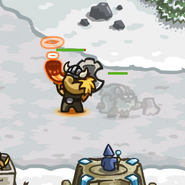 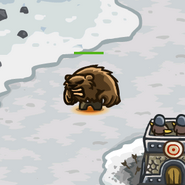 Ingvar facing Vez'nan
Add a photo to this gallery

View All Heroes
Retrieved from "https://kingdomrushtd.fandom.com/wiki/Ingvar_Bearclaw?oldid=54213"
Community content is available under CC-BY-SA unless otherwise noted.