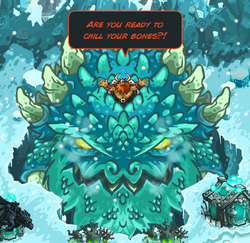 Jokull is the second boss in Kingdom Rush: Vengeance, fought in stage 11, Jokull's Nest. Despite being a boss fight, she is not treated as an enemy by the game.

After wave 15, the King of the North Arkuz will summon Jokull, which will then emerge from the massive hole in the middle of the stage. Throughout the fight, Jokull does not move from the spot; she instead relies on waves of minions that spawn constantly from both entrances until it is defeated.

Being treated as scenery instead of an enemy, Jokull cannot be attacked or damaged by towers. Instead, during the course of the level (before the fight against Jokull), the player's goblin minions will build two special cannons for the sole purpose of killing Jokull. Once a cannon is ready, tapping on it will cause it to fire at Jokull. Both cannons must fire three times each in order to defeat Jokull (the left cannon will explode instead of firing on the final time, however).

Jokull supports her minions by breathing ice at towers to freeze them, similar to the Svell Druid's ability but affecting many more towers. Initially, this attack will freeze 3 towers, which will increase to 6 as Jokull's pseudo-HP gets low. She can also fire her horn spikes into the air which will land on your troops or hero for extremely high damage; the damage appears to increase as her health gets lower.

HOW TO TAME YOUR DRAGON (30 gems) Defeat Jokull, mother of Wyverns.

Retrieved from "https://kingdomrushtd.fandom.com/wiki/Jokull?oldid=54798"
Community content is available under CC-BY-SA unless otherwise noted.