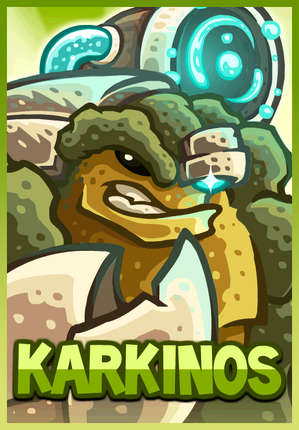 Karkinos the Warmaster is a hero in Kingdom Rush: Frontiers. He is unlocked by paying $2.99 as an in-app purchase, and is not available on Flash. He is unlocked at Emberspike Depths on the Steam version and he starts at level 5.

When all of Karkinos's powers are active, he uses them in this order:

Karkinos has a 5% heal rate, taking 20 seconds to fully heal.

Karkinos is a melee specialized hero. He has a decent health bar, good armor, and great base damage, capable of taking quite a lot of hits and return heavy blows. However, Karkinos is not as durable as he seems to be, thus remember to micromanage him when strong enemies come. Karkinos' skills make him very versatile, so you should not be afraid of moving Karkinos, instead, you should always get him to where enemies start clustering, to make the most of his AOE abilities.

Karkinos' main playstyle is wreaking havoc within dense hordes of enemies. His high damage output is great at killing unarmored foes, however he falls short against well armored, durable ones, such as Saurian Myrmidons, despite his Pincer Attack ignoring armor. He also lacks a good crowd control skill and cannot stand for long against stronger foes, unlike Alric and Grawl. He has to be supported with soldiers and plenty of fire power, preferably Mages to make up for his weakness against armored enemies, and soldiers to group foes, which will make much better use of him.

On a side note, Karkinos' extremely slow heal rate means that sometimes it is better to let him die without retreating him, especially when he is at death's door, because the amount of time he spends behind the line, healing, can be just as long as the period he takes to respawn. 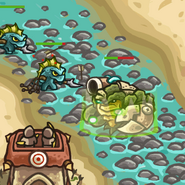 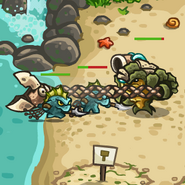 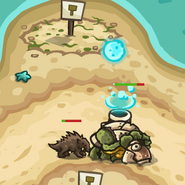 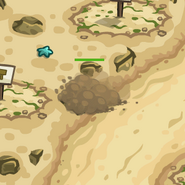 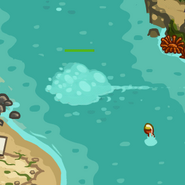 "No retreat, never surrender."
Add a photo to this gallery

View All Heroes
Retrieved from "https://kingdomrushtd.fandom.com/wiki/Karkinos?oldid=54260"
Community content is available under CC-BY-SA unless otherwise noted.