King Denas is the overarching protagonist of the Kingdom Rush franchise and the superior of the “good side” protagonist.

He is also the heroic main antagonist of Kingdom Rush: Vengeance.

King Denas is the ruler of the kingdom that you are defending throughout the game. He is depicted at the end of the game as a man in his forties, who still enjoys a party when there's a good occasion. He is also a Hero to be used in Kingdom Rush, unlocked by buying the Premium Content (Flash), by paying $2.99 (Mobile) or by completing Forsaken Valley (Steam).

King Denas appears briefly in a comic strip at the end of Kingdom Rush: Frontiers, after Umbra is defeated.

Your Majesty itself brings an arsenal of power and courage to the battlefield. Long live the King!

King Denas empowers closest towers with a purple aura in a large AoE radius. The aura grants towers 20% to attack speed and range for a set amount of time. Barracks are not affected by this skill. If a user move a hero while the aura is still in effect, the aura effect will be canceled. (Cooldown: 10 seconds)

King Denas orders his subordinates away from the war zone to unleash mayhem on a small area located on the path via an 'X' mark. The catapults fire on the 'X' mark on the area, dealing damage. King Denas can move without interrupting the skill as long as the 'X' mark is present. The projectiles ignore 1/2 armor. Cooldown: 12 seconds. 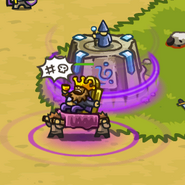 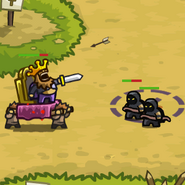 After Beating the Third Paragon: