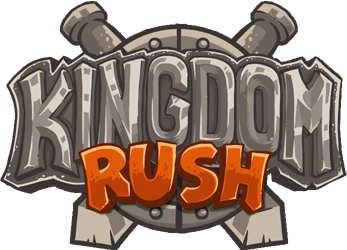 Kingdom Rush is a fantasy tower-defense game created by Ironhide Game Studio and sponsored by Armor Games. First released on 28 July 2011, it grew to be immensely popular and has racked up a total of over 70 million plays on Armor Games alone.

The Premium Content was released on 17 August 2011, for a minimum price of $5.99 (on Armor Games) or 60 Kreds (on Kongregate), adding several bonus stages, heroes, a new spell, and a few other extras. Kingdom Rush was released on the iPad on 19 December 2011, and on Android on 15 May 2013, priced at $2.99 (standard) or $4.99 (HD), with the bonus stages and heroes but without the premium extras, and a version for Steam on 6 January 2014 $9.99, with an exclusive 4-stage campaign, The Curse of Castle Blackburn, released on 4 July 2014, with all heroes and missions but without the premium extras. On September 3 2015 Kingdom Rush became free to play but still with in-app purchases.

A sequel, titled Kingdom Rush: Frontiers, was released on the 6th of June 2013.

A prequel game, titled Kingdom Rush: Origins, was released simultaneously on iOS, Android, and Kindle Fire on the 20th of November 2014.

A further sequel, titled Kingdom Rush: Vengeance, was released on the 22nd of November 2018.

Kingdom Rush follows the formula of a typical tower-defense game. Placing towers on the side of a path to destroy enemies that appear in predetermined waves, the objective is to defeat all the waves before they reach the end of the path, using the towers and certain abilities. Letting too many enemies through results in a Game Over.

Kingdom Rush expands on the usual set up by using a limited number of tower types, while introducing individual units that engage enemies on the path and including bosses. As levels progress new towers and further upgrades are unlocked. Heroes are used as unique units that can be directed around the level. Heroes have special moves that increase in strength as they gain experience through a level, and will return after a while if defeated.

The story of Kingdom Rush unfolds as each level is started, with a basic introduction to the stage written as instructions to you, the nameless General in the King's forces. From the first stage, a small town on the coast under attack by roaming outlaws, the game follows a route through the Kingdom and beyond, fighting off an invading force led by the main antagonist; and ultimately final boss; the dark wizard Vez'nan.

Starting a new game first offers you a choice of difficulty. Casual, Normal and Veteran. The difficulty changes the Hit Points (or HP) of the enemies. The difficulty level can also be changed before starting each stage. Each stage is represented on a map of the Kingdom, and upon selecting one you are briefed with a basic idea of what to expect before you can begin the level. There are three types of game modes. The default and main mode is Campaign, the story mode of the game. After this mode has been beaten with a 3-star rating, two new modes are unlocked: Heroic Challenge and Iron Challenge. These new modes offer different types of challenges, by changing the waves, enemies or towers available.

A completed level is awarded stars based on how successfully it has been played. The number of lives remaining (out of 20) determines how many stars are awarded, with three stars for a great play (18-20 lives remaining), two for an average play (6-17 lives remaining), and one for a poor play (1-5 remaining). Failing to keep all lives will result in defeat. In Heroic and Iron challenge modes, there is only 1 life and beating the modes award 1 star each.

Stars earned can be spent on Upgrades. Each upgrade requires between 1 and 4 stars and have a permanent effect on towers and spells. Upgrades can be bought and reset at any point during the game, allowing you to pick and choose the best upgrades for each level until you have enough Stars to buy all of them. There are six upgrade paths: one for each of the basic tower types (Archers, Barracks, Mages and Artillery), and for the two spells (Rain of Fire and Call Reinforcements).

An in-game encyclopedia records all new information as it is revealed in the game, such as tower and enemy statistics. It also has several basic Tips and Tricks and a link to Strategy Guides provided by Ironhide Studios themselves (videos of the levels being completed).

As Kingdom Rush is available on several different platforms, there are some differences between them that alter game-play.

Kingdom Rush has been met with unanimously positive reviews and has won many awards:

Music By Taking Off 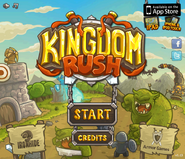