Kingdom Rush: Rift in Time is a tabletop board game created by Lucky Duck Games in collaboration with Ironhide Game Studio, launched via Kickstarter on April 9th, 2019.

Welcome to Kingdom Rush, where you and your allies must work together to fend off the furious onslaught of the mysterious Time Mage. Command Heroes and build Towers to defend the realm by placing polyomino pieces to attack your enemies and deploying soldiers to hold back the ever-advancing horde. Be careful, though! The Time Mage’s portals are wreaking havoc, causing all of the Towers to warp in and out of existence! Will you play your Towers to defend the Kingdom, or will you pass them to your compatriots so that the Towers can be upgraded? The decision is yours!

It was the end of The Age of Towers. With the last of the Kingdom's enemies defeated, the stalwart defenders of the realm put away their weapons of war and turned onwards more peaceful endeavours. Unseen by even the mightiest of wizards, the nigh-omnipotent Time Mage spied upon the Kingdom from behind a cloak of powerful magic. As the last of the Towers that had so ably defended the land were dismantled, the Time Mage summoned all of their arcane might and ripped a hole in the very fabric of space and time!

It began as a small shimmer that grew into a gaping tear from which foes from across the ages began to emerge. Creatures of legend and lore sprang forth from the mystical rift to do battle, as even more rifts tore open across the realm.

Behind their swords and shields, the clever engineers and mages of the Kingdom hurried to develop Towers that could stand against this new threat, until this message arrived: "We have harnessed the unstable spacetime magics ourselves!" Using this new power, the Kingdom called Heroes from across the ages to their defense and focused the dimensional energy into their own building materials, allowing their Towers to be as mobile as their foes!

Monsters are depicted on a 5x5 grid. Towers create damage tiles in certain shapes, that defeat monsters by covering them with the damage tile. Towers can only be played once a turn, as the time portals have made them unstable. You can upgrade a tower by passing a card on to another player, forcing you to decide how best to play. Do you fight the hordes, or make your towers stronger for future battles?

Each player is also in control of a Hero, who bring their unique skills to the scenario. Heroes available are:

Bosses are also found in the game, who must be defeated if you are ever going to bring down the Time Mage. Bosses found include:

Expansions are additional campaigns that can be played, featuring new Heroes, enemies, bosses to make each new play of the game different.

The Kickstarter for the game featured several levels of pledges, where the more money offered in the pledge would result in more being rewarded. 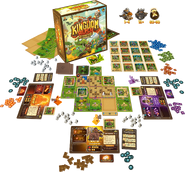 All information, images and logos used with permission from Lucky Duck Games

Retrieved from "https://kingdomrushtd.fandom.com/wiki/Kingdom_Rush:_Rift_in_Time?oldid=55157"
Community content is available under CC-BY-SA unless otherwise noted.