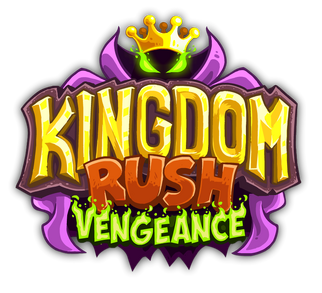 Get ready to show your enemies who’s the real boss! Vez'nan, the powerful almighty wizard has returned. Lead your powerful dark army and make the Kingdom tremble with each step!

Kingdom Rush: Vengeance is the fourth game in the Kingdom Rush franchise developed by Ironhide Game Studio, announced on July 17th 2018 and released on November 22nd 2018. It is a sequel to Kingdom Rush: Frontiers and sees a return to the locations first seen in Kingdom Rush. The player now takes on the role of the villain Vez'nan as he returns to Linirea and once again throws the nation into chaos.

Kingdom Rush: Vengeance follows the formula of a typical tower defense game. Placing towers on the side of a path to destroy enemies that appear in predetermined waves, the objective is to defeat all the waves before they reach the end of the path, using the towers and certain abilities. Letting too many enemies through results in a Game Over.

Vez'nan has returned... and this time he's the one with the initiative!

The tale begins as Vez'nan the dark lord escapes his fiery prison only to find his tower invaded by King Denas' human henchmen. Appointing the player as his general, both of them then proceed to liberate the tower and kill every human worker within. Vez'nan then begins his plans for dominating the kingdom, starting with one of the kingdom's closest allies, the dwarves.

With his army in tow, Vez'nan and the general begin invading the dwarven lands. Although they meet multiple attempts at resistance, they eventually manage to corner Bolgur, the dwarven king, where he attempts a last stand, although it is in vain. The dark lord secures the funds needed to continue his campaign by capturing the immeasurable amounts of gold stored beneath the defeated king's throne.

Instead of working their way through Stormcloud Temple like in the original Kingdom Rush, Vez'nan's force takes a detour and proceeds to the frozen north. There, multiple awful situations befall the force, with firstly the north inhabitants being alerted to the dark army's presence. Then the army is split, trapped on multiple ice floes, and then it is hit by a blizzard as it makes its way to corner Arkuz, the king in the north. Eventually the player prevails and defeats Arkuz, encasing him in a sculpture of ice, and completing the penultimate step in Vez'nan's invasion.

Lastly, Vez'nan proceeds to invade the grasslands that comprise Denas's territory. The two take down major kingdom locations also featured in the original Kingdom Rush, including Silveroak Forest and Otil Farmlands. After isolating King Denas from his major allies Alleria Swiftwind, Magnus Spellbane, and Gerald Lightseeker, Vez'nan proceeds to invade his castle, himself playing an active role in the battle for the castle alongside the player. Denas is defeated, and Vez'nan completes his invasion... only to reveal that a much deeper, darker evil lies within the former Denas' castle.

This game is in many ways similar to the previous games in the Kingdom Rush installments. The player, who acts as Vez'nan's general in the game, is responsible for the combat operations of Vez'nan's dark army. Such operations involve constructing towers that weather wave after wave of enemy assaults, with the goal of preventing any enemies from breaking through the defenses and going past the exit. If a set amount of enemies successfully pass through the defenses, the player loses.

Towers are constructed using gold as the currency. A set amount of gold is provided to the player at the beginning of each level, and enemies killed provide the player with a gold bounty, allowing him to build more towers as the battle progresses. A stark difference from previous games is that Kingdom Rush Vengeance does not feature four primary towers; instead it has a multitude of already specialised towers available for construction, and of these, five towers can be brought to each battle. Each of these specialised towers can be upgraded the usual four times but cannot be further specialised into any other special tower. Some towers are analogous to the four types of towers (archers, mages, barracks, artillery) featured in the previous games, while others represent some combination of the four, and others may be part of an entirely new tower family.

In addition to towers, the player has three spells at his disposal; two of these spells are provided by Vez'nan. One is the classic two-person Reinforcements, now called Call Demon Goonies, prominently featured throughout Kingdom Rush, and the second is a powerful spell, Soul Impact, which is analogous to Thunderbolt and Rain of Fire from the previous games. The third spell is determined by the hero you have selected to bring to the battle, and is analogous to hero spells from Kingdom Rush: Origins.

Heroes and Items also play a role in the game. Heroes are available through gameplay and can be purchased with real money. They are elite troops who actively block and fight enemies on the battlefield. Heroes are player-controlled to a degree, and hero selection determines the third spell a player has in his arsenal. In addition to the spell, heroes have their own set of skills which they use independently on the battlefield. Upon defeat, heroes do not disappear indefinitely, but will be revived after a delay.

Items, as in previous games, are purchasable goods whose usage is controlled by the player. Items are purchased using the premium in-game currency Gems. These items are potentially extremely beneficial to the player, being capable of various effects such as freezing and stalling enemies, provided that the player uses them correctly.

Kingdom Rush: Vengeance is not available on Flash.