The Knights Templar is one of the two Level 4 Melee Towers in Kingdom Rush: Frontiers. They are the most durable troops available, with the highest armor and HP values. They are similar to the Paladins from the original game in their role and design. Templars are capable of dealing significant damage with their great-swords, and have a chance to revive themselves when upgraded.

They regenerate 25 HP per second when not in combat.

Seasoned resilient warriors, the Templars are a force to be reckoned!

Similar to Paladins, Templars are the more durable advanced units of their game. While they do not have as high armor as the Paladins, and lack their healing ability, they have more health and damage and can gain the ability to resurrect themselves.

"When the going gets tough..."

*with the Boot Camp upgrade

Attacks have a 10% chance of causing bleeding, dealing True Damage over 3 seconds. This ability does not work against Phantom Warriors because of their lack of physical body.

"That's the cup of a carpenter."

Knights Templar have a chance to cheat death every time they are dealt lethal damage. They regain a percentage of their maximum health upon revival.

*Note: EHP stands for Effective HP, and factors in armor values to give an estimate of how much damage the unit can receive.

HIGHLANDER Have one Templar revive 5 times a row.

LET IT BLEED! Kill 100 enemies by letting them bleed to death. 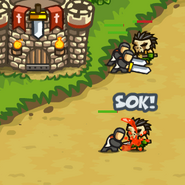 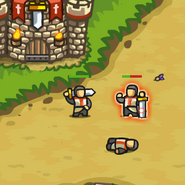 Holy Grail in action
Add a photo to this gallery

View All Towers
Retrieved from "https://kingdomrushtd.fandom.com/wiki/Knights_Templar?oldid=53518"
Community content is available under CC-BY-SA unless otherwise noted.