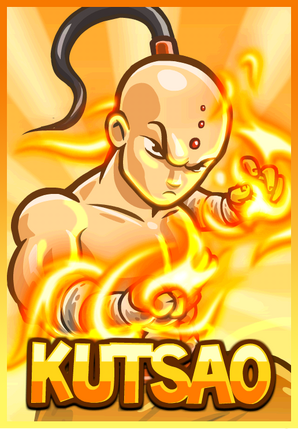 Kutsao the Monk is a hero in Kingdom Rush: Frontiers, unlocked by paying $2.99 as an in-app purchase. He is unlocked at Emberspike Depths on the Steam version. He is a fast attacker.

Attack that causes crippling pain, dealing 40/60/80 physical damage and causing its victim to deal 20% / 40% / 60% less damage on every attack, except instant kill attacks.

Kutsao is an unarmored but fast melee hero adept at hurting a limited number of enemies. He can hold his own against most enemies while dealing good damage over a short period of time; however Kutsao loses much effectiveness when overran with strong, armored enemies, or targeted by ranged foes.

Kutsao is a hero that needs micromanaging to exploit his full potential - such as moving to Brutes to use Snake Style on them and then retreating. Always pay attention to Kutsao on the battlefield, first to extract more of his powerful and unique skills, second to avoid him taking too much damage, as he is not very durable.

When Kutsao is performing his combo attacks, he will not move where you tell him to, thus keep watch of incoming danger and retreat Kutsao early to avoid an easy death. 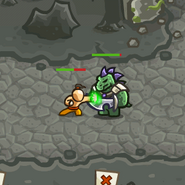 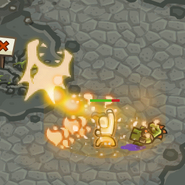 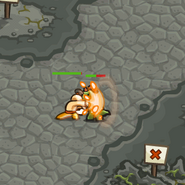 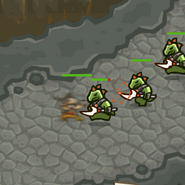 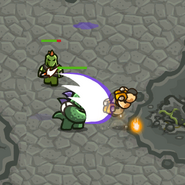 "The obstacle is the path."
Add a photo to this gallery

View All Heroes
Retrieved from "https://kingdomrushtd.fandom.com/wiki/Kutsao?oldid=54866"
Community content is available under CC-BY-SA unless otherwise noted.