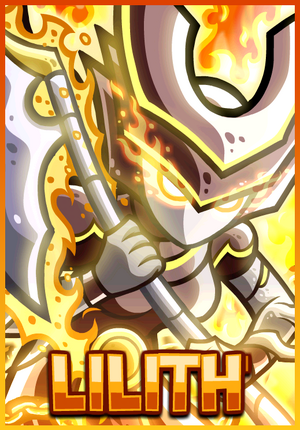 Lilith the Fallen Angel is a free Hero in Kingdom Rush: Origins. She starts at level 5 and is unlocked at Stage 15, Shrine of Elynie. Lilith is the result of the hero poll, A Hero Is Born.

Lilith is a divine champion that has fallen from grace, she is seeking redemption for her sins by obliterating all darkness from the land.

Absorbs the soul of a fallen enemy to receive a 30%/60%/90% damage bonus for 12 seconds.
(The description is incorrect on iOS.)

Equal chance to call 3/4/5/6 Fallen Angels that attack* and stun** enemies, or a Rain of Fire with 11 meteors from above.
iOS version is bugged; Level 1 Fallen Angel damage is the same as Level 2. And the Rain of Fire damage is incorrectly described.

Lilith is a mostly melee but also ranged fighter. Her ranged attack is much slower than her melee, making her melee more effective for battle. Her stats may be weak, but her skills are comparatively more powerful than most other free hero abilities, making her great when her powers are active but weak without them. Ultimately, Lilith is mainly a damage dealing glass cannon, with powerful attacks but little in terms of durability or crowd control.

Compared to Eridan, her ranged attacks are inferior, as he can fire and heal during his ranged attacks as well as be able to do almost the same damage to single targets, on top of having an AOE hero spell that recharges faster and with more reliability. However, her damage output is slightly higher and has a better first skill. Most of the paid heroes are better, dealing near equal damage to Reaper's Harvest as well as having other skills that are more useful than abilities like Soul Eater and Resurrection.

Lilith's skill set has skills for multiple occasions. As you level up Lilith, you would want to upgrade her skills depending on the role you would like her to play.

Pity those who cross me! 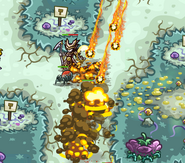 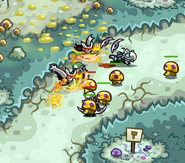 Your soul is mine! 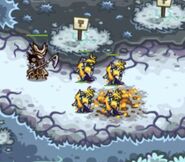 View All Heroes
Community content is available under CC-BY-SA unless otherwise noted.
Advertisement