20
Lord Blackburn is the boss of the Curse of Castle Blackburn mini-campaign in the Steam, iOS, and Android versions of Kingdom Rush. He is the second most heavily armored boss in the series (after one of the Ancient Ghosts, who has physical damage immunity).

Once a great noble knight, his yearn for the power to battle evil corrupted him and his lands.

In addition to having more armor than any other boss in the franchise, Lord Blackburn has a range of powerful skills to breach your defenses. Most notably, he can disable nearby towers and units for 4 seconds and stun heroes for 2 seconds by slamming his axe on the ground. He can also hack through multiple troops at once by swinging his axe, although this attack is rather weak compared to those of other bosses. His tower disabling ability is the most powerful in the series; it affects any tower in about 3-holder-long radius from him, covering up to 8 towers.

On Steam and Android, Skeleton Knights rise from soldiers or Earth Elementals that are killed near the boss. 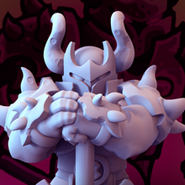