Magnus Spellbane is a hero unit that corresponds to the Mages upgrade path. He is one of five heroes with ranged attacks. He is unlocked by buying the Premium Content (Flash), by paying $0.99 (iOS and Android) or by completing Icewind Pass (Steam).

Unleash the arcane forces of Linirea, let loose a mystical storm, and spellbind your enemies! With his arcane arts and thirst for knowledge.

Magnus creates Shadows of himself that fight for 10 seconds. They are uncontrollable, and are capable of both melee and ranged combat. (Cooldown: 10 seconds)

Magnus calls forth a small arcane circle in front of enemy units. Upon summoning the circle arcane meteors will rain down upon the enemy, dealing true damage for every meteor that hits the enemy units. (Cooldown: 15 seconds) 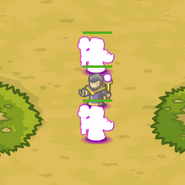 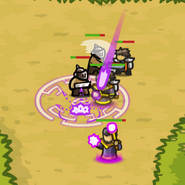 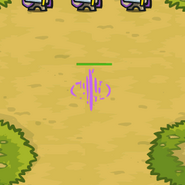 Teleport
Add a photo to this gallery

Magnus Spellbane stands in defense of the City of Lozagon, overseeing the battle and using his magic to defeat Vez'nan's forces in their attempts to storm the capital

Unlike Alleria Swiftwind in the previous level, Magnus does not interact with the level directly, instead he operates in the same fashion as a battle commander found in an Endless Challenge. He taunts the player and uses three different spells to hinder their progress. The structure he is on spins and a symbol lights up indicating which skill he is going to use.

It is also through Magnus' influence that three Golem Houses are created, and a Toad House feeds on troops.

When Magnus is defeated, he is trapped inside one of Vez'nan's energy cages.

Before the wave starts:

After the battle is won:

Retrieved from "https://kingdomrushtd.fandom.com/wiki/Magnus_Spellbane?oldid=53971"
Community content is available under CC-BY-SA unless otherwise noted.