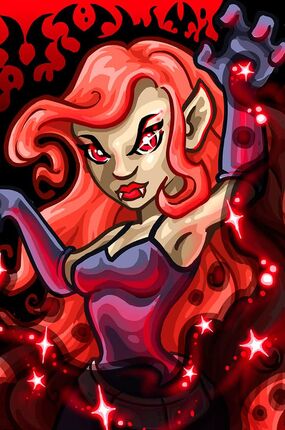 Margosa the Vampire Mistress is a premium hero in Kingdom Rush: Vengeance. Margosa costs $2.99 and starts at Level 5.

The wounds earned during Lord Vasile's defeat were cut deep into Margosa's memory. She recovered in an isolated cave. Her strength and hatred for Linirea growing day by day. She now returns looking to satiate her bloodlust.

Summons a bat to her aid. Bat deals True Damage.

Teleports an enemy in front of her, impeding it from advancing and stunning it for 2/3/4 seconds.

Margosa turns into a beast thirsty for blood. In beast form, Margosa heals for 80% of the damage dealt.

*: It is affected by One Man Army.

Shapeshifts into a bat when traveling long distances.

Margosa is, without doubt, an amazing duelist, relying on her insane normal attack damage under beast form instead of her abilities (though the abilities are still decent, it's just helping)

Add a photo to this gallery
View All Heroes
Retrieved from "https://kingdomrushtd.fandom.com/wiki/Margosa?oldid=54795"
Community content is available under CC-BY-SA unless otherwise noted.