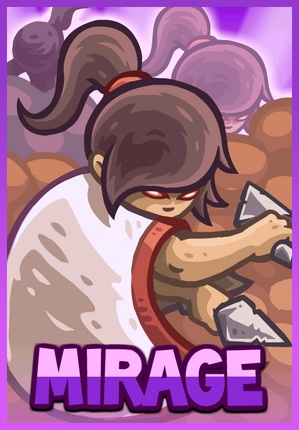 Mirage the Assassin is a hero in Kingdom Rush: Frontiers. She is unlocked at stage 4, Dunes of Despair.

A legendary assassin of the order, Mirage has sworn her daggers and her unorthodox but effective tactics to the protection of Hammerhold and the forces of good.

She has fair skin, red eyes, and brown pony tail hair. She wears a white cape with a red border and a red hair tie. Her in-game model wears white pants with a brown clothing, leather shoes (similar to the assassin's shoes) and (looks like) a white tank top but in the comic strip ending, it reveals that she wears a white tube top. She wields kunai daggers for both range and close quarters.

Summons 2/3/4 copies of herself that run and attack nearby enemies, dealing 24/32/40 True Damage each, and then vanish.

Damage values in parentheses are of Flash version.

Unlike the other three free heroes, Mirage's potentials must be exploited through micromanaging her, since she is not as tacky nor as reliable as a blocker and is much more useful at range than in melee. Although the specifics may differ from player to player, there are a couple of useful tips and tricks to use Mirage effectively:

A note on Precision: It only affects the range of her normal attack, excluding Shadow Dance and Lethal Strike. And because she is the only ranged hero who doesn't heal when ranged-attacking, it is advised to upgrade it last. 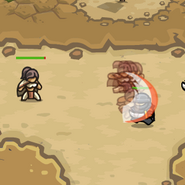 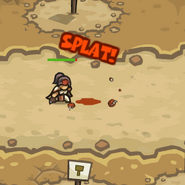 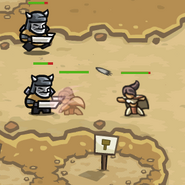 Mirage in the frontiers ending
Add a photo to this gallery

View All Heroes
Retrieved from "https://kingdomrushtd.fandom.com/wiki/Mirage?oldid=54734"
Community content is available under CC-BY-SA unless otherwise noted.