Moloch is the boss of the Burning Torment mini-campaign in Kingdom Rush and possibly the biggest overarching antagonist of the first Kingdom Rush.

A feared and overconfident demon overlord, he eats hot coals for breakfast!

Moloch's modest health is balanced out by his dangerously fast movement speed. Other than Vez'nan, he is the only boss to possess an area instant kill attack (other bosses only have either area attack or instant kill); and he can use it on every unit (while Earth Elementals are immune to Vez'nan's). His path is very short, and combined with his above average speed and ability to quickly clear units designed to stall him, he can easily overtake an unprepared player. 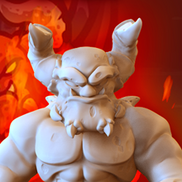 View All Enemies
Retrieved from "https://kingdomrushtd.fandom.com/wiki/Moloch?oldid=55699"
Community content is available under CC-BY-SA unless otherwise noted.