The Moon is a satellite of the planet where the games take place. It gives power to the enemies that appear in the Shadowmoon mini-campaign of Kingdom Rush: Frontiers.

The Moon is tracked at the top of the screen in a half circle. When it reaches the center of the half circle, it stops there for a while. During this time the screen gets darker, more enemies will emerge from shallow graves (or, in the case of Ghosts, crypts) located around the map, and most enemies get a boost in power:

(*: On some occasions, it can be skipped or shortened if the next wave is called instantly.)

It is wise to pre-build towers to catch additional enemies that may spawn further down the path when the Moon is full, and to deal with the increased power of enemies. The sudden rise in strength could easily startle you and allow foes to run over your defense quickly, especially the Abominations, which has a lot of health and can clear out soldiers unimaginably fast with death explosions, carving a hole for other foes. 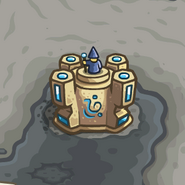 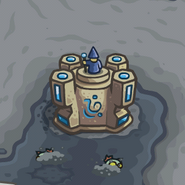 Under Moonlight
Add a photo to this gallery
Retrieved from "https://kingdomrushtd.fandom.com/wiki/Moon?oldid=54049"
Community content is available under CC-BY-SA unless otherwise noted.