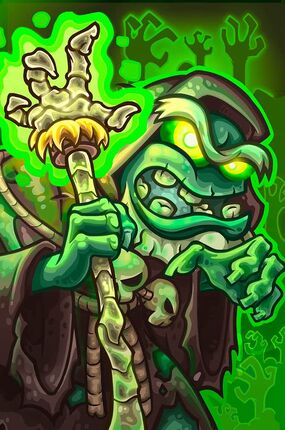 'Mortemis the Eternal Lich is a premium hero in Kingdom Rush: Vengeance. Mortemis costs $2.99 and starts at Level 5.

Refusing to die, this old wizard King exchanged his humanity for the forbidden knowledge of the arts of Necromancy. Now an undead, he joins Vez'nan's army pursuing the dark power that was promised to him.

Using the tormenting whispers of the dead, he forces an enemy to run away for 6/7/8 seconds.

When an enemy dies near Mortemis it will resurrect as a zombie. Up to 4/5/6 zombies at the same time.
Zombie's health degrades over time; -1/-3/-5 HP per second.

Summons a Zombie Behemoth to fight enemies for 15 seconds, dealing area True Damage (area: 80) and stunning enemies for 1.2 seconds on every attack.

Mortemis is a hero who focuses on stalling. He has a variety of abilities that emphasize the importance of Barracks and stalling power. In order to make the most of Mortemis' powers, he has to be placed near the front line, but protected by his undead and your own warriors. Mortemis' powerful base attack and area of effect skills will make your enemies tremble.

In depth analysis of his abilities:

View All Heroes
Retrieved from "https://kingdomrushtd.fandom.com/wiki/Mortemis?oldid=52271"
Community content is available under CC-BY-SA unless otherwise noted.