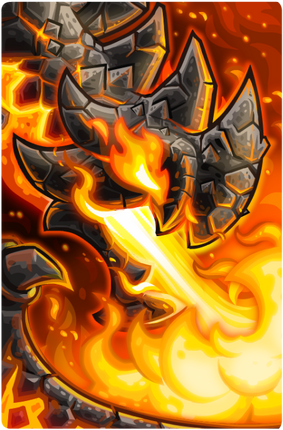 Murglun the Lava Dragon is a premium hero in Kingdom Rush: Vengeance, introduced with the Frozen Nightmare Mini-Campaign. Murglun costs $5.99 and starts at Level 5.

Inhabiting the bowels of the Earth, the millennial Murglun is a young members of the imposing race of magma dragons. She has inscrutable motivations and was never interested in the mortal conflicts, until Vez'nan managed to manipulate her with the gem of the heart of a volcano.

Magma Dragons never had an interest in mortal conflicts, the petty humans and their affairs were insignificant, their mortal lives shorter than a sigh and mostly spent on foolish conflicts.

Murglun, even at her young age, knew this; she lived with her kin in the bowels of the earth, where the lava rivers kept her warm and the conflicts and power struggles of the surface were meaningless.

Now Murglun has to obey his command and use her fire powers to scorch the heart of his foes until this battle is won and she can return to her lair.

Creates a geyser that kills an enemy instantaneously.

Flaps her fire wings, creating a fire whirl on the ground (area: 100) for 4 seconds and dealing 5 True Damage per 0.2 second. Requires 2 targets to activate.

Periodically, Murglun drops magma that inflicts 20 True Damage in an area of 75.

Back to the mantle...
Add a photo to this gallery

View All Heroes
Retrieved from "https://kingdomrushtd.fandom.com/wiki/Murglun?oldid=53953"
Community content is available under CC-BY-SA unless otherwise noted.