Nazeru is the first boss in Kingdom Rush: Frontiers, encountered at Nazeru's Gates. He is a powerful red efreeti.

Be careful what you wish for, the red efreets are not the genies you dream of...

After the final wave in campaign mode, the two eyes sculpted into the gate form Nazeru out of two beams.

Like Vez'nan and Moloch, Nazeru's attacks deal enormous area-of-effect damage and will invariably kill your units. He also has the ability to temporarily cover your towers in sand, disabling them for a few seconds; unlike J.T.'s freeze slam or Vez'nan's spell lock, it cannot be removed manually.

Nazeru will also summon Lesser Efreeti to various parts of the map.

Nazeru is relatively easy to defeat. Using a variety of Archmages and Crossbow Forts, and timing the Rain of Fire well, his health will deplete very quickly.

When Nazeru dies, he gets put back in a genie lamp and the Nazeru's Gates promptly shatter, allowing you to continue to the Crimson Valley in the eastern jungle.

The strategy for this boss is simple. Just lay on the damage, and make sure none of his minions eat through your defenses. Use lines of Archmage towers, paired with archers and barracks to hold off his minions, while the huge damage of the mages rips him apart. For the whole level, only 4 Archer Towers of Level 3-4 are needed. You can then fill the entire map with Archmage Towers.

Beware with your Barrack troops, Nazeru has a nasty habit of transforming them into Lesser Efreeti, so sell or move them away from the exit when he appears. Don't have flying heroes nearby when he instant kills troops blocking him as his snap will reach them too. 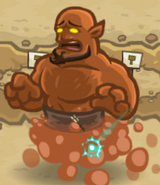 Nazeru's lamp on sale
Add a photo to this gallery

View All Enemies
Retrieved from "https://kingdomrushtd.fandom.com/wiki/Nazeru?oldid=52862"
Community content is available under CC-BY-SA unless otherwise noted.