The Necromancer Tower is a Level 4 Mage Tower in Kingdom Rush: Frontiers, upgraded from the Level 3 Wizard Tower. It has the innate ability to raise enemy corpses into Skeletons and Skeleton Knights. Necromancers are first available in Lost Jungle. The Necromancer himself resembles the Necromancers in Lord Vez'nan's army from the first Kingdom Rush. Its emblem is a green skull.

"Dark magic adepts that can raise undead minions from the corpses of fallen enemies."

The Necromancer Tower's most notable asset is the ability to raise up to 8 skeletal minions from corpses of humanoid enemies that die within its range.

With this ability, Necromancers can assemble an army of expendable minions and significantly slow the enemy's advance. However, the Necromancer Tower's has high variance damage and is weaker on average than the Archmage Tower. It can be seen as more of a support tower due to its high utility and mediocre damage output.

"Honor in death as in life!"

Summons a Death Knight: a resilient soldier whose aura increases the damage of nearby skeletons, Alric's Sand Warriors and Bonehart's Bone Golems by 50%, and grants extra 30% armor.

Death Knight rally range
Add a photo to this gallery

*Note: Only accounts for the Death Knight's damage, does not account for damage from skeletons it buffs.

NECROPOLIS Have 20 skeleton minions active at the same time.

It's not decay, It's ripening 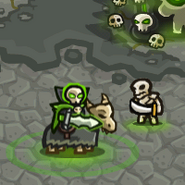 View All Towers
Retrieved from "https://kingdomrushtd.fandom.com/wiki/Necromancer_Tower?oldid=52991"
Community content is available under CC-BY-SA unless otherwise noted.